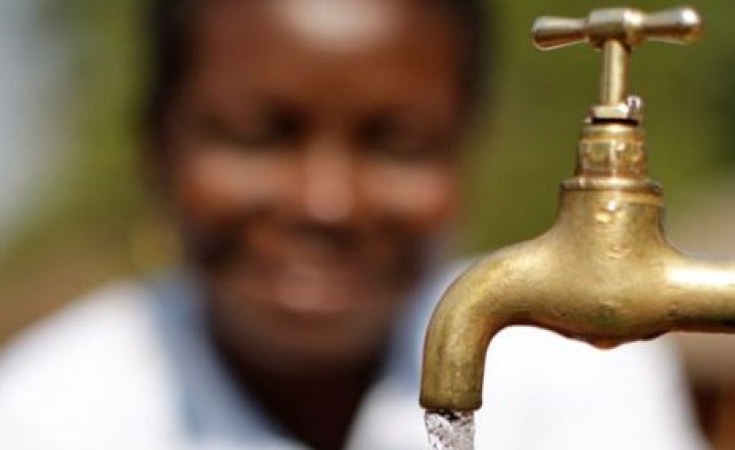 Water supply in the Eastern Cape is precarious as the continuing drought compounds run-down municipal systems and the government's failure to pre-empt the effects of climate change.

Posing for media interviews recently on the bone-dry ground of the Nqweba Dam outside Graaff-Reinet, this was ANC councillor Penn Koeberg's solution to what has been described as the Eastern Cape's worst drought on record, as told to SABC News: "We are having quite a number of prayers ... and we are saying that in order to get rain, that is the purpose of those rain services that are taking place."

The Nqweba Dam which was completed in 1925, has the capacity to hold more than 44.8 million m³ of water. It is in the Camdeboo National Park in the Karoo, north of Port Elizabeth.

Nelson Mandela Bay mayoral committee member for engineering and infrastructure Andile Lungisa said in the same interview that the municipality had plans to build a desalination plant. But in the short term, "we must also use the mobile truck where they can be able to take water from the sea, they can take water from any dam, from the rivers, where they can quickly clean the water as they are moving. Those are plans we have put in place as a municipality."

While mobile desalination units are in use in India and China, their maximum daily output is not enough for one unit to supply a single rural village or town. And South Africa does not appear to own any of these trucks. Other solutions are needed.

Amatola Water area operations manager Chris Nair says every coastal town in South Africa must build a desalination plant as soon as possible. The Eastern Cape water services utility operates the desalination plant near Kenton-on-Sea, 60km from Makhanda, which desalinates 2.5 megalitres of water a day and will have added another megalitre a day to its desalination capacity by 15 December. The potable water from the plant costs R11.50 per kilolitre, but Amatola Water cross-subsidises this so that residents pay less.

The desalination plant was built in 1982 and refurbished in 2010. It costs about R50 million to build a plant of this size, says superintendent George Sokunene.

Water cannot be pumped directly from the sea as this only results in 30% clean water at the end of desalination and 70% brine, which is the waste product of desalination. So sea water is pumped into the plant through boreholes, which are sunk into the beach and the estuary. Nair says there is no limit to the number of sea water wells that can be sunk as "hydrological studies indicate what the yield would be".

The water goes through several stages of filtration and then reverse osmosis, where it is pumped using osmotic pressure through permeable membranes with tiny pores. The result is clean water stripped of minerals such as magnesium and calcium, which are later added back in, and a waste product of brine that has to be discharged back into the sea using diffusers to disperse the salty dump.

"With the drought, surface water becomes unreliable so we are always looking for alternative sources and alternative ways of abstracting, going deeper into the sand, for example," says Amatola Water executive director of operations Asanda Gidana.

Desalination plants are often criticised for using large amounts of electricity, so the Kenton-on-Sea plant bought an energy recovery unit, which harnesses kinetic energy and reduces the amount of electricity needed by 30%. Technological advances mean that components, such as the membranes that clean the water, are always being upgraded to deliver better quality water while using less energy.

The energy recovery unit is patented and only available overseas, as are the membranes, which cost R1.5 million each. This adds to the cost of desalination. But Sokunene says repair and maintenance can be done locally. "We don't outsource and wait. We fix things ourselves. This is the way to go," he says.

"Every coastal city must invest in a reverse osmosis plant as a backup. With our scarce water resources, we must also have industrial waste water recycling," says Nair.

Advances in desalination are happening in the Middle East, where desert countries have always been short of water. "We have not needed it before on their scale. In Egypt, the soldiers are now guarding the abstraction points in the River Nile. It is going to come to that in South Africa. Eventually, the water will have to be guarded," he says.

Nelson Mandela University botany department head Phumelele Gama says desalination is a good option for coastal towns if they use wind and solar power, and do not burden the grid with demands for electricity. "However, the question also becomes, how do communities receive water inland? It needs thought about how you get the water there," he says.

While a common response to the Eastern Cape drought has been to sink boreholes, Gama cautions against this. "Boreholes seem to be a good idea, but in the long run they really are not. If we are increasingly drawing out borehole water, we are limiting the recharging capacity that groundwater has on surface water. Wetlands that depend on groundwater supply us with nice, fresh water. Once you deplete those aquifers, you might really impact the ecology."

Boreholes being drilled close to the sea have recently been found to contain a lot of salt water, he says. This is because too much water has been extracted through boreholes generally, which has led to sea water seeping into the ground and contaminating the water table.

But time is running out. Eastern Cape towns such as Makhanda no longer have a regular supply of clean municipal water. It hardly rains in these areas now and even if the government installed rainwater tanks at every home, they would be unlikely to fill up any time soon.

Makhanda resident Clement Simuja says the water coming out of the taps is brown and undrinkable, even when boiled. "With tap water, even if I boil it, the heavy metals will still be there. The water is rusty and the pipes are very old," he says.

There is a natural spring about 3km from the town, where residents queue daily to collect clean water. But the long line of people waiting means it is considered impolite to collect more than about 75 litres at a time. So two trips are needed every week for a small family to collect the minimal amount of water needed for drinking and cooking, says Maryanne Quinton.

Cuma Boltina says: "If the line is too long, we have to buy at Pick n Pay. I would never drink the tap water in this town. Most of the university residence students who can't get transport will have to buy at the shops."

Supermarket Pick n Pay sells municipal tap water that it filters on site for R1 a litre. But unemployed residents can afford neither this nor the cost of transport to get to the natural spring. For the past 15 years, residents who have registered as low-income households with the municipality's indigent programme have received 6 000 litres of free water a month per household. But this free water is now either unavailable or unclean.

In towns like Makhanda, paying the high cost of R11.50 per 1 000 litres of desalinated water might soon be the government's only option.

Previous Story
Tagged:
Copyright © 2019 New Frame. All rights reserved. Distributed by AllAfrica Global Media (allAfrica.com). To contact the copyright holder directly for corrections — or for permission to republish or make other authorized use of this material, click here.