South Africa: Sex Education Raises Questions About the Role of the State in South Africa 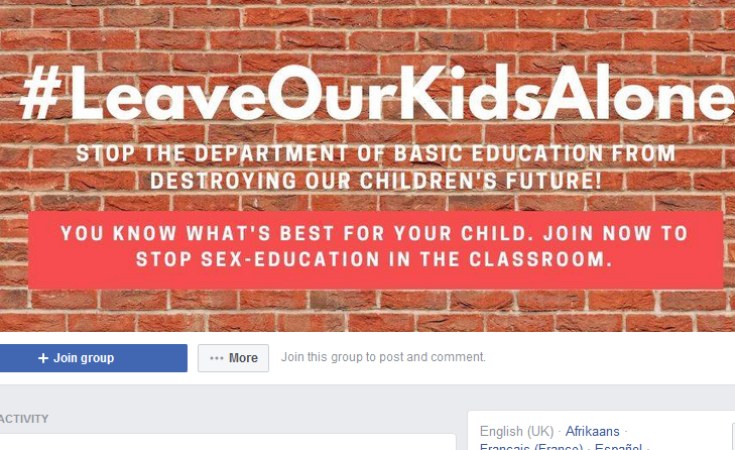 Passions are running high in South Africa about a proposed new curriculum for education about sexuality in schools. Aimed at children in grades 4 to 12, it's intended for roll out in public schools in 2020.

Concerns raised by parents, schools and civil society organisations include that elements of the curriculum are not appropriate for the age of the children who will be targeted - mostly 10-year olds - and that it undermines the authority of parents.

Another concern is that key stakeholders, including parents, schools and teachers were not consulted. Anger about this is reflected by the fact that a parent-based Facebook group #LeaveOurKidsAlone gained over 100 000 members in less than four weeks.

The political question that the new curriculum has raised is: does it show that the government has over-reached its powers? Has it overstepped the mark in the delicate relationship between the state and society? And what does this say about the divide between what is public and what is private?

The Department of Basic Education has retracted the option for parents to have their children excluded from the lessons. This, and the fact that parents were not widely consulted, contravenes the White Paper on Education and Training which stated:

Parents or guardians have the primary responsibility for the education of their children, and have the right to be consulted by state authorities with respect to the form that education should take and to take part in its governance. Parents have the inalienable right to choose the form of education which is best for their children, particularly in the early years of schooling, whether provided by the State or not, subject to reasonable safeguards which may be required by law. The parents' right to choose includes choice of the language, cultural or religious foundation of the child's education, with due respect to the rights of others and the rights of choice of the growing child.

In addition, the new curriculum is not in keeping with the spirit of section 15 of the Bill of Rights of the South African Constitution, which protects individual rights, such as the freedom of opinion, religion and expression.

It is indicative of a prescriptive state in terms of shifting the imparting of norms and values in a sensitive area such as sexuality from parents in the family context, to the state through public schools. This is a move towards a more moralistic and intrusive state.

Theories of the state

The state is either limited in power, a neutral umpire in society that doesn't favour any particular group, individual, family, religion or ideology. Or it is overarching and prescriptive in terms of beliefs, norms and values.

In the classical liberal understanding of the role of the state, the authority given to those in power through elections is limited by a constitution; checks and balances, either horizontal (such as an independent judiciary) or vertical (such as organised civil society and an independent media); and the recognition of sphere sovereignty.

The idea of sphere sovereignty implies an institutionally pluralistic society, where power and authority are divided among various "spheres". Thus, the state, the family, religious institutions, civil society have their own jurisdiction. And, as long as they don't do any harm, other spheres of authority should not intrude on them. It recognises that societies are pluralistic.

These countervailing distributions of power protect the liberties of citizens and guard against the centralising impulse of the state from infringing on them. Philosophical pluralists, ranging from John Stuart Mill to the contemporary Hannah Arendt, contrast this recognition of diversity with the monist nature of totalitarian states, which penetrate all aspects of society.

The other form of state-society relations is one in which a state actively intrudes into the personal or private realm and becomes prescriptive, especially around beliefs, norms and values. Such a state becomes more than a neutral arbiter and rather dictates how people should live and conduct their lives.

On a scale, less extreme forms of this would be a nanny state, with its extensive social responsibilities, as some would classify the welfare state of the UK. But the scale moves towards totalitarianism, as evident in North Korea.

The common feature is that the distinction between the public and the private becomes blurred, and the state prescribes moral values, behaviour and meddles in every aspect of human life.

Historical examples include the Holy Roman Empire, which conflated church and state, imposing one religion on all. There are also the communist systems of the Soviet Union and its satellite states; and the fascist states such as Nazi Germany and Italy under the dictator Benito Mussolini. In both, only civil society organisations and religion approved by the state were allowed.

As Mussolini argued in the Doctrine of Fascism:

The Fascist conception of the State is all embracing; outside of it no human or spiritual values can exist, much less have value.

South Africa's governing party, the African National Congress, has long historical and ideological ties with communism. It continues to understand itself as the vanguard of society.

Unlike other theories, which seek to understand or explain society, Critical Theory actively seeks to change it.

The push-back against the curriculum by parents, teachers, schools, religious bodies and civil society alike, is a clarion call to the state to stay out of their homes.

Parents are reclaiming their sphere of jurisdiction, in particular the right to teach and raise children in accordance with their norms and values. Will the South African government respect this?