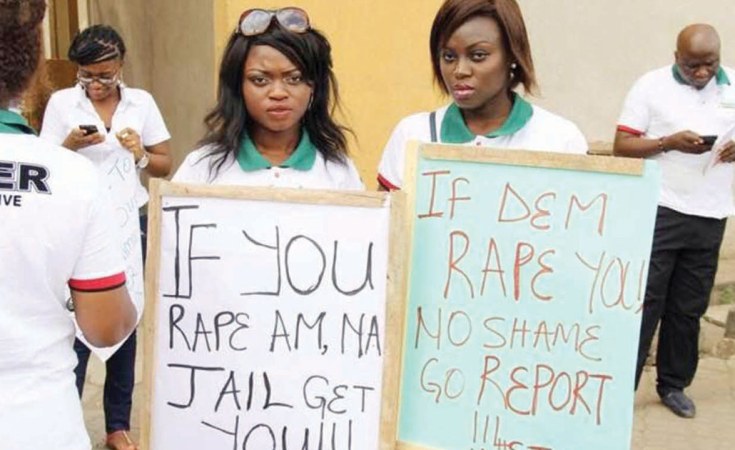 Photo: African Arguments
Oluwaseun Osowobi (left in photo above) founded Stand To End Rape, a youth-led organisation providing support to victims of gender-based violence, after her own traumatic experience of rape.
Voice of America (Washington, DC)
By Timothy Obiezu

Nigerian authorities this week launched the first nationwide register of sex offenders and held a procession in Abuja to raise awareness of and work to prevent violence against women. While they welcomed these as steps forward, women's rights activists and victims of gender-based violence note Nigeria has a poor record of prosecution.

An event Monday in Abuja that marked the start of 16 days of activism against gender-based violence kicked off with a candlelight procession for victims at the National Centre for Women Development.

Events in Nigeria are coinciding with the 16 Days of Activism Against Gender-Based Violence, an annual international campaign coordinated each year by the Center for Women’s Global Leadership at Rutgers University in New Jersey.

The anonymity the online register affords victims is a major improvement on tracking offenders, said Julie Okah-Donli, director general of the National Agency for the Prohibition of Trafficking in Persons.

"With the sex offenders register, it's a name-and-shame policy,” she said. “ ... It's very important, because you have schools recruiting teachers, and houses recruiting helpers and drivers. So you have to be sure you're not recruiting a rapist or a pedophile."

According to the U.N. children's fund, UNICEF, one in four Nigerian girls is sexually abused before age 18, and a majority of offenders are never prosecuted. With little faith of getting justice, most victims of sexual violence are often too afraid of stigma to report the crime.

But that tide turned after hundreds of protesters in May marched against the police for detaining 65 women for alleged prostitution and then assaulting and raping a number of them.

"It is unfortunate that the custodians of the law, like the security officers, could get involved in such acts,” she said. “It's very unfortunate, and I think that the law should be stiffened to ensure that such people are brought to [justice]. Our judiciary process is slow, and judgments are not obtained on time, and because of a lack of evidence, at times, it still boils down that the victims are not speaking out."

Nigerian police have said they are investigating the allegations and have vowed to pursue prosecutions. But police themselves have been accused of committing violence against women on the streets and in clubs at night.

Dorothy Njemanze, a victim of sexual assault, recalled one experience in 2015 that occurred as she was on her way to host an evening event.

"Before I knew what was happening, people approached me, and I was given a beating,” she said, “and in the process, a man put his hand in my trousers."

Njemanze was unable to get justice in Nigeria, so she took her case to the Economic Community of West African States (ECOWAS) Court of Justice. The court in 2017 ruled in her favor and ordered the Nigerian state to pay Njemanze $50,000 in compensation.

But while the ruling was considered a landmark judgment, Nigerian authorities have yet to pay her.