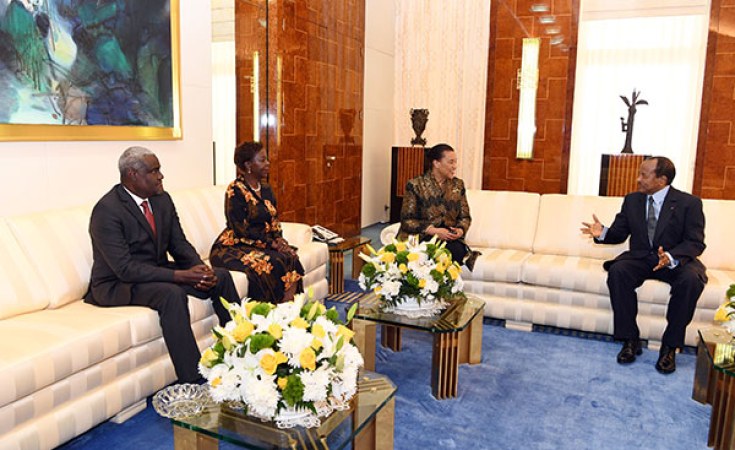 The African Union, Commonwealth and La Francophonie, an organisation of French-speaking countries, on Wednesday pledged support to Cameroon's peace efforts in the crisis-hit regions of Northwest and Southwest.

The tripartite mission was at the invitation of President Biya on the restoration of peace in the restive English-speaking regions.

"We are determined to do all we can as three organisations to support the peaceful process and we are encouraging everyone to put peace and good governance first," said Ms Scotland.

"We have been clear that there have been problems and concerns and we have had that very clearly outlined," Scotland said adding that solutions to the problems will come from Cameroonians.

"The main responsibility will rest on Cameroonians themselves; we want peaceful coalition and existence," she added.

For her part, Ms Mushikiwabo said La Francophonie was ready to help the country find a common ground.

"We do not have a miracle solution but we have expressed to the head of state our availability to continue to accompany the country. We think that we have an obligation to modestly contribute either through advice, interventions in mediation actions or on technical aspects such as bilingualism," said Mushikiwabo.

The trio later met with other stakeholders including the opposition, members of the civil society.

The three-year armed conflict has claimed over 3,000 lives, with half a million people displaced from their homes and 40,000 more having fled to Nigeria, according to the International Crisis Group but the government disputes the figures.

In September, President Biya called for talks to end the crisis but key separatist leaders were not invited.

The UN says the conflict has created a humanitarian emergency for nearly two million people with no indication that it will end soon.

Opposition leader, Maurice Kamto, who declared himself winner of the October 2018 presidential election has said his party Cameroon Renaissance Movement (MRC) will not participate in the legislative and municipal elections in February until the crisis is resolved.

The opposition is also demanding political reforms to level the playing field which it says has been slanted in favour of President Biya who celebrated 37 years in power earlier this month.

Universities to Track Atrocities in Anglophone Cameroon
Tagged:
Copyright © 2019 The East African. All rights reserved. Distributed by AllAfrica Global Media (allAfrica.com). To contact the copyright holder directly for corrections — or for permission to republish or make other authorized use of this material, click here.