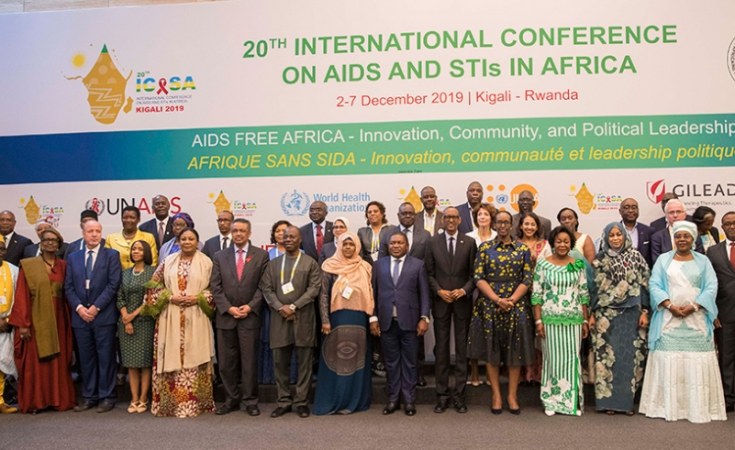 Village Urugwiro/New Times
Rwandan and Mozambican presidents Paul Kagame and Filipe Nyusi, First Lady Jeannette Kagame and her counterparts from around the continent, as well as other high-profile delegates in a group photo after the opening of the ICASA 2019 conference in Kigali.
World Health Organization (Geneva)

Kigali, 2 December 2019 - Six African First Ladies today renewed their commitment to ending childhood AIDS in Africa by 2030 and keeping their mothers healthy. This came during a high-level meeting organized by the Organisation of African First Ladies for Development (OAFLAD) on the sidelines of the International Conference on AIDS and Sexually Transmitted Infections in Africa (ICASA) in Kigali, Rwanda.

The event was an opportunity to reflect on the unique national, regional and global leadership role that African First Ladies play in the fight against HIV.

The First Lady of Rwanda, HE Madam Jeannette Kagame welcomed the participants to Kigali and spoke about the 17-year journey OAFLAD has made since it was established. She said "Celebrating our gains should also lead us to a deeper analysis of our journey thus far."

The First Lady of Congo and OAFLAD President, HE Madam Antoinette Sassou N'guesso opened the meeting by saying, "Under our leadership we have seen successes in the fight against HIV and AIDS ... I would like to assure our partners and the population that the First Ladies ... . will continue to lend their strong support to the fight against HIV and AIDS."

The high-level meeting celebrated successes in the HIV response and the transformative leadership of the First Ladies, but also highlighted challenges such as the slowing momentum in cutting new HIV infections and the large funding shortfalls.

Two years ago, OAFLAD and the African Union launched the "Free to Shine" campaign which reinforced the political commitment of African nations to end childhood AIDS and keep mothers healthy. OAFLAD and WHO signed an agreement in February 2016 to work together to end AIDS, enable political commitments to eliminate cervical cancer and stop maternal, newborn, child and adolescent deaths by 2030 in the African region.

"Since its establishment in 2002, the Organization has been a trailblazer in Africa in raising awareness on the HIV/AIDS pandemic, mobilizing resources, promoting strong community leadership and networks to advocate for people living with HIV," said Dr Tedros. He also congratulated the First Ladies on their new strategic plan which emphasizes universal health coverage and a healthier population in Africa.

The new OAFLAD strategic plan for 2019-2023 aims to contribute to the health and well-being of children, youth and women through advocacy, resource mobilization and strategic partnerships.

On the continent, Eastern and southern Africa is leading the elimination of mother-to-child transmission of HIV with an average of 92% of pregnant women are receiving anti-retroviral therapy. Rwanda, Botswana, Malawi and Namibia are among an ever-increasing number of countries making great progress on the prevention of mother-to-child transmission with a more than 70% decrease in children 0-14 years acquiring HIV from 2010 to 2018.

Next Story
Tagged:
Copyright © 2019 World Health Organization. All rights reserved. Distributed by AllAfrica Global Media (allAfrica.com). To contact the copyright holder directly for corrections — or for permission to republish or make other authorized use of this material, click here.