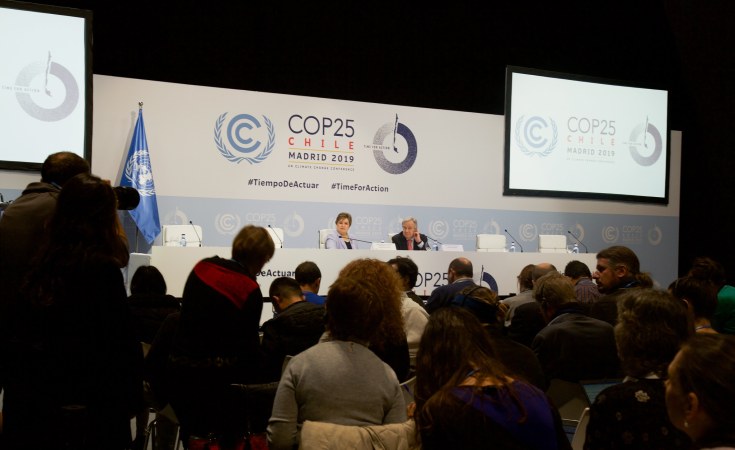 Madrid — During the 25th round of climate change negotiations starting today in Madrid, Spain, African civil society organisations will call on governments from both developing and developed nations to play their promised roles in combating climate change.

"We're fatigued by COP [Conference of Parties] jamborees which have become a ritual every year," said Dr Mithika Mwenda of the Pan Africa Climate Justice Alliance (PACJA) - an umbrella organisation that brings together over 1,000 African climate and environment civil society organisations.

"We know the science is clear about the level [in which] we need to act, yet we procrastinate and prevaricate while maintaining our profligate lifestyles," he told IPS in an interview.

The 25th United Nations Framework Convention on Climate Change (UNFCCC) Conference of Parties (COP 25) comes a week after the U.N. Environment Programme (UNEP) released a report warning that unless global greenhouse gas emissions fall by 7.6 percent each year between 2020 and 2030, the world will miss the opportunity to get on track towards the 1.5°C temperature goal of the Paris Agreement.

The Paris Agreement is an agreement reached at the 21st Conference of the Parties (COP 21) in Paris, France, where the world's nations undertook a determined course to reduce climate change. Among the commitments was to reduce the increase in global temperatures.

The annual Emissions Gap Report, which was released on Nov. 26 warns that even if all current unconditional commitments under the Paris Agreement are implemented, temperatures are expected to rise by 3.2°C, bringing even wider-ranging and more destructive climate impacts.

"Any slight change in global temperatures can have a devastating effect on millions of livelihoods, and could expose people to life-threatening heat waves, water shortages and coastal flooding," said Dr Mohammed Said, a climate change research scientist based in Kenya.

According to his research in Kenya's Arid and Semi Arid regions, people in counties that experienced increased temperatures in the past 50 years have suffered significant loss of livelihoods with some having to change their lifestyles altogether.

"In Turkana County for example, the temperatures increased by 1.8°C, and as a result, the cattle population declined by 60 percent, and now residents have been forced to turn to more resilient camels, goats and sheep," he told IPS.

It is the same situation all over the world. A study published in Nature Climate Change points out that if global warming causes a rise of 1.5°C or 2°C, then there will be extremely hot summers across Australia, more frequent drought conditions and more frequent heat leading to bleaching of the Great Barrier Reef.

Another study by the United Kingdom's Met Office reveals that the changing climate will make heat waves a common phenomena worldwide and even intense in the U.K..

In Africa, climate change has caused flooding, drought, change in the distribution of rainfall, and the drying up of rivers. It has affected agriculture, food security and human health. And it has also led to conflicts over resources, impacting national security in various countries.

In Kenya, residents of West Pokot County are currently grappling with the deaths of 50 people who were last week buried alive by landslides following heavy rainfall that continues to pound the East African region.

According to the Kenya Meteorological Department, the above-normal rainfall has been caused by sea surface temperature anomalies in the Indian, Atlantic and Pacific Oceans caused by global warming. Floods in the region, which have already displaced hundreds of households and have swept away bridges, roads and property, are expected to continue for the next three weeks, according to the meteorological focus.

However, Mwenda believes that all is not lost. He notes that though the Nationally Determined Commitments (NDCs) are inadequate to lead to emission levels required by science and justice, there is still hope that momentum building on their implementation won't be compromised.

"We will not be tired of telling our leaders that the future generations will judge them harshly as they have failed to rise to the occasion even when science is very clear that we have exceeded planetary boundaries," he said.

In order to address climate change adequately, civil society is also calling for a dedicated financial mechanism to be established in Madrid to support Loss and Damage with a clear agreement on new sources of finance.

During the 19th round of negotiations in Poland, the COP established the Warsaw International Mechanism (WIM) for Loss and Damage associated with Climate Change Impacts (Loss and Damage Mechanism), to address loss and damage associated with impacts of climate change, including extreme events and slow onset events, in developing countries that are particularly vulnerable to the adverse effects of climate change.

"As we head to Madrid, we expect that all countries will endeavour to deliver on ambitious commitments in climate finance, especially in regard to loss and damage, strong national targets, and clear rules on trading emissions between countries," said Robert Bakiika, the Executive Director of EMLI Bwaise Facility, a Ugandan NGO and one of the admitted observer organisations at the UNFCCC.