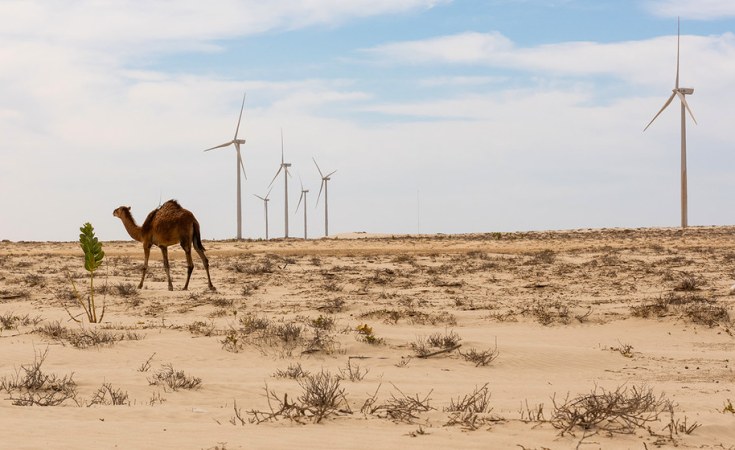 Freya Morales/UNDP Mauritania
A wind farm on the outskirts of Nouakchott, the capital of Mauritania, is aimed at giving more people access to renewable energy sources.
Thomson Reuters Foundation (London)
By Laurie Goering

London — Fiercer weather and worsening wildfires drove more than 20 million people a year from their homes over the last decade - a problem set to worsen unless leaders act swiftly to head off surging climate threats, anti-poverty charity Oxfam said on Monday.

Much of the displacement caused by cyclones, floods and fires appeared temporary and in some cases due to better efforts to evacuate people ahead of danger, Oxfam researchers said.

But its "sheer scale" was a surprise, said Tim Gore, Oxfam's climate policy leader, with island nations like Cuba, Dominica and Tuvalu seeing on average close to 5% of their people out of their homes in any given year.

"This is the warming world we have long been warning about. Now we're seeing it play out before our eyes," he told the Thomson Reuters Foundation.

The Oxfam study, released as two weeks of U.N. climate negotiations start in Madrid, examined the numbers of people displaced inside their home countries by climate-fuelled disasters between 2008 and 2018, based on government and international agency data, as well as media reports.

People were three times more likely to be displaced by cyclones, floods or fires than by conflicts, it found.

Some countries, like war-torn Somalia, were battered by both droughts and floods, sometimes in the same year.

That "confluence of disasters" leaves many poor nations - where most of the displacement is occurring - struggling to recover from one crisis before the next hits, Gore said.

Some have run aid appeals for both drought and flood relief simultaneously, he said.

"This is extraordinary," he said. "This is climate chaos - what it actually looks like."

Seven of the top 10 countries with the highest displacement by proportion of their population were developing island states, largely in the Pacific and the Caribbean, the report found.

But around 80% of all people forced from their homes by weather disasters over the last decade were in Asia, where large populations in countries from the Philippines to Sri Lanka live in areas threatened by cyclones or flooding, it said.

In May, Cyclone Fani alone led to the displacement of 3.5 million people in Bangladesh and India, most of them evacuated in advance of the storm in order to hold down casualties.

The study did not look comprehensively at how many people were uprooted by "slow onset" disasters like droughts where it is harder to judge the beginning and end, Gore said.

Including drought-linked displacement would make the numbers "much higher", he added.

It also did not estimate how much of the displacement became permanent - "a really unknown quantity", Gore said.

In 2018, Oxfam made a rough estimate of the number displaced by extreme weather disasters during the year who were still out of their homes by the end of it, and came up with about 10-20%.

As more people leave their homes as a result of weather disasters, costs - and threats to social stability - are rising quickly for the countries trying to manage that displacement, often with few resources, the report said.

At the U.N. climate talks in Madrid, environmental and development groups are pushing to establish a fund to bail out countries on the frontline of "loss and damage" as a hotter planet brings wilder weather and rising seas.

A Warsaw International Mechanism for Loss and Damage was created at climate negotiations in 2013 with the aim of aiding poor nations that have produced few of the emissions that drive climate change but are suffering its strongest effects.

So far, however, the mechanism has produced little concrete help or new money for those countries, beyond backing the use of insurance policies to limit losses, critics say.

Gore said insurance alone could not address the whole problem. "Loss and damage is the next key battleground of the climate talks," he added.

Recent analysis by the Stockholm Environment Institute, endorsed by nearly 100 civil society groups, estimated new finance of at least $50 billion a year would be needed by 2022 to deal with loss and damage, rising to $300 billion by 2030.

Gore said no amount of help would enable everyone to stay in their homes as climate change impacts strengthen, and preparing now would help protect those on the move.

"Are we going to manage this, or see the people least responsible for the crisis forced from their homes in a chaotic way that tramples on their rights?" he asked.

"The costs are going to continue to spiral. The sooner we get down to serious negotiations about how to manage it in a serious, responsible way, the better," he said.

Previous Story
Under Pressure. Can COP25 Deliver?
Next Story
Injustice of Worsening Climate Impacts Rises Up Agenda At UN Talks

Under Pressure. Can COP25 Deliver?

COP25 - African Parliamentarians Called on to Speak as One
Tagged:
Copyright © 2019 Thomson Reuters Foundation. All rights reserved. Distributed by AllAfrica Global Media (allAfrica.com). To contact the copyright holder directly for corrections — or for permission to republish or make other authorized use of this material, click here.