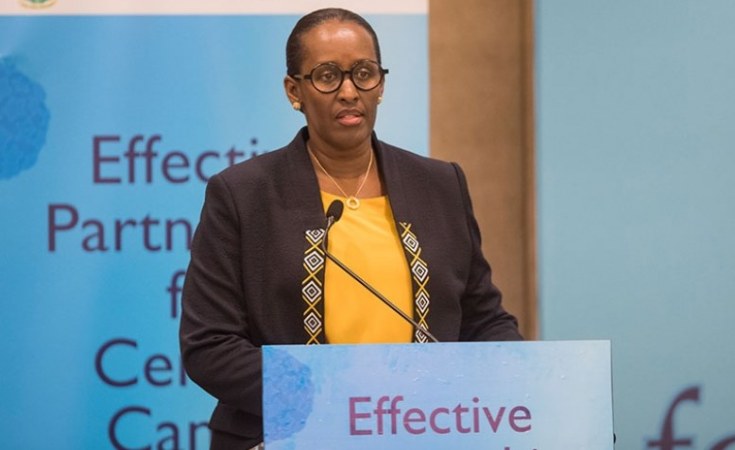 The First Lady of Rwanda, Mrs Jeannette Kagame, has commended a new programme that will provide cervical cancer prevention options to women aged between 30-49, that have not had a chance to get vaccinated against the Human Papilloma Virus, when they were younger.

Set to commence in January next year, the new programme will complement the existing efforts that have mainly been focusing on getting young girls (mainly 12-year-old) vaccinated against cervical cancer as well as screening services and treatment for older women.

The new project is set to give mass preventive treatment to women, in the targeted age group, mainly in the form of treatment of precancerous lesions (early cancer signs) to prevent them from developing into invasive cancer.

According to Dr François Uwinkindi, the Director of Cancer Programme at Rwanda Biomedical Centre, this kind of treatment is one of the two ways used in cervical cancer prevention.

"In cervical cancer prevention there are two ways: there is primary prevention which is avoiding contact with the Human Papilloma Virus. Vaccination is one of the things done in primary prevention, as well as avoiding sexual activity especially for young girls who are under 18 years," he said.

The other preventive way, he said, is treating precancerous lesions.

"This is when you are screened for cervical cancer and you are found with precancerous lesions, and you are given treatment so that it will not develop into invasive cancer," he explained.

The new project is a two and a half year partnership between the Ministry of Health, the Clinton Health Access Initiative (CHAI) and the International Drug Purchase Facility (UNITAID).

It will use new technologies to improve access to screening of cervical cancer.

It will be rolled out in five districts of the country for the beginning - as a pilot project.

Under the project, medical facilities will receive mobile testing and treatment equipment as well as training for local care providers.

Up to 72,000 women are expected to be screened for cervical cancer across the five districts including Gatsibo, Nyamasheke, Musanze, Huye and Nyarugenge, with plans to scale it up to other parts of the country.

Speaking at an event yesterday, that brought together the Ministry of Health, UNITAID, Clinton Health Access Initiative, among other partners, the First Lady of Rwanda, Mrs Jeannette Kagame, commended the program as she reminded her audience that cervical cancer is preventable and called for more efforts to fight it.

"This highly preventable disease, which touches on a sensitive aspect of women's health, is one that deserves more attention, as it has been the subject of misguided views that turned out to be detrimental to the early detection, and prevention," she said.

Angeline Usanase, a cervical cancer survivor, weighed in on the importance of testing and early treatment.

Usanase, 67, was diagnosed with cervical cancer in 2017, but was treated and now tells her survival story, encouraging other women to test regularly.

"If I had been going for regular tests, say every month, the medics would have perhaps seen the symptoms of cancer and dealt with them," she said.

"It is good that we have a Government that has shown us light about this cancer. Back in the day, people could think that such a disease is as a result of witchcraft but now many people are getting to know what it is."

Cervical cancer is the top fourth affecting women globally, contributing to 6.6 per cent of all cancers in women. As it is the case with many other diseases, cervical cancer disproportionately affects the poorest populations.