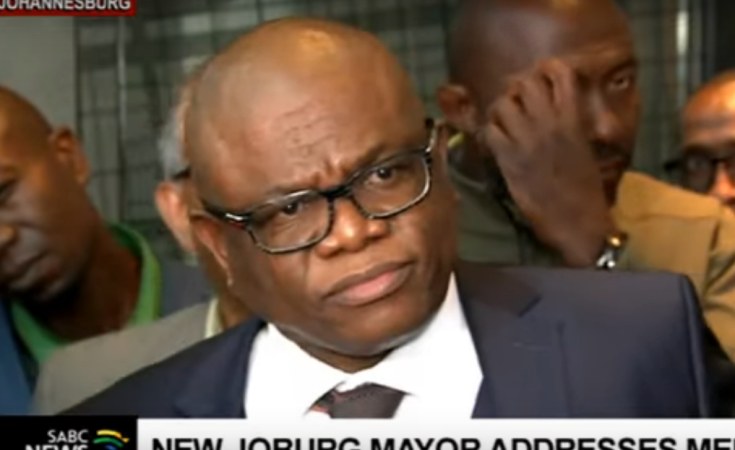 After the ANC reclaimed the Johannesburg metro, the EFF accused the DA of participating in the re-establishment of what it calls a "corrupt government".

The ANC's Geoff Makhubo became the new Johannesburg mayor on Wednesday after the DA's Herman Mashaba resigned from the position in October.

While the ANC only had 121 seats in the council, Makhubo still managed to bag 137 votes, meaning several smaller parties voted for him as did some DA councillors.

According to the EFF, three DA councillors voted for Makhubo instead of their own candidate, Funzela "Funzi" Ngobeni. The DA with 103 seats only managed to get 101 votes, while the EFF, with 30 seats in the council, received 30 for its candidate, Musa Novela.

Reacting to the outcome of the vote, EFF deputy president Floyd Shivambu said the DA had participated in re-establishing an ANC government in Johannesburg.

"Our conscience is clear that we did not form part of establishing a corrupt government here in Johannesburg," Shivambu said on Wednesday.

"What has just been established here, it looks like with the participation of the DA is a corrupt government of looters who are going to loot this city."

In a statement, the EFF said it noted with sadness the ANC had won the mayoral race, and again blamed the DA for the result.

"It is evident from the results that the DA caucus, together with other smaller opposition parties, voted for the corrupt ANC. The DA's three council members aided Geoff Makhubo of the corrupt ANC to become the mayor," EFF spokesperson Mbuyiseni Ndlozi said.

"This is a sad day indeed for the residents of Johannesburg who in 2016 voted the ANC out of the metro. The opposition parties, together with the DA, have now brought the same rejected ANC through a backdoor."

Ndlozi expressed appreciation for the "unity" displayed by the EFF caucus, which he inferred, had not voted for the ANC.

"They voted as a single, united and disciplined force of the left. This demonstrates the EFF as the only stable and united political party that our people can rely on for many gains.

"We will remain in the opposition benches. We are not scared of the DA-aided corrupt ANC. The EFF is the only party that can take the ANC head-on. We will take them toe-to-toe on both the ground and in the boardrooms. We shall never retreat to hold them accountable, exposing at all times their parasitic and greedy ways."

Shivambu echoed these sentiments, saying the EFF had not sold out and would never have voted for Makhubo whom he described as an "extremely compromised and extremely conflicted" person.

Johannesburg Mayor Quits After Opposition's Zille Returns
Tagged:
Copyright © 2019 News24Wire. All rights reserved. Distributed by AllAfrica Global Media (allAfrica.com). To contact the copyright holder directly for corrections — or for permission to republish or make other authorized use of this material, click here.