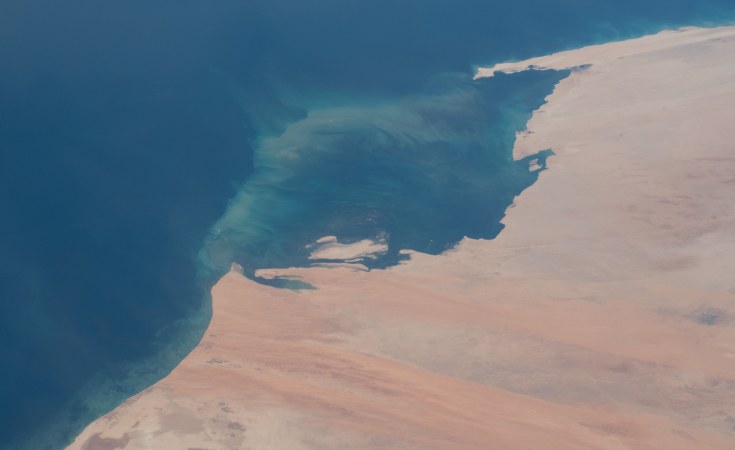 Photo: NASA Johnson/Flickr
An Expedition 57 crew member photographed the desert coast of Mauritania on the Atlantic Ocean near the border with Western Sahara on the African continent in December 2019.
Deutsche Welle (Bonn)

At least 150 people were on board the migrant vessel that departed from Gambia at the end of November. A further 83 who were on board swam to shore.

At least 57 people have died after a boat carrying migrants was shipwrecked in the Atlantic Ocean off the coast of Mauritania, the International Organization for Migration (IOM) said Wednesday.

It was one of the deadliest disasters this year among people making the dangerous attempt to reach Europe.

The IOM said a further 83 migrants who were on board swam to shore.

The vessel, carrying at least 150 people including women and children, had been low on fuel as it approached Mauritania, the United Nations migration agency said in a statement.

Survivors are being helped by the Mauritanian authorities in the northern city of Nouadhibou, said the IOM.

Survivors reported that the boat had left Gambia on November 27. An unknown number of injured people were brought to hospital.

"The Mauritanian authorities are very efficiently coordinating the response with the agencies currently present in Nouadhibou," said Laura Lungarotti, Mauritania's chief of mission with the migration agency.

More than 35,000 Gambian migrants left the small country of just over 2 million and arrived in Europe between 2014 and 2018, the IOM reports.

A 22-year stint ofthen-President Yahya Jammeh's oppressive rule impacted the country's economy, contributing to the high number of people trying to migrate to Europe. Many ended up stranded in Libya and Niger. However, after Jammeh was forced to cede power in 2017, some Gambians have started to return.