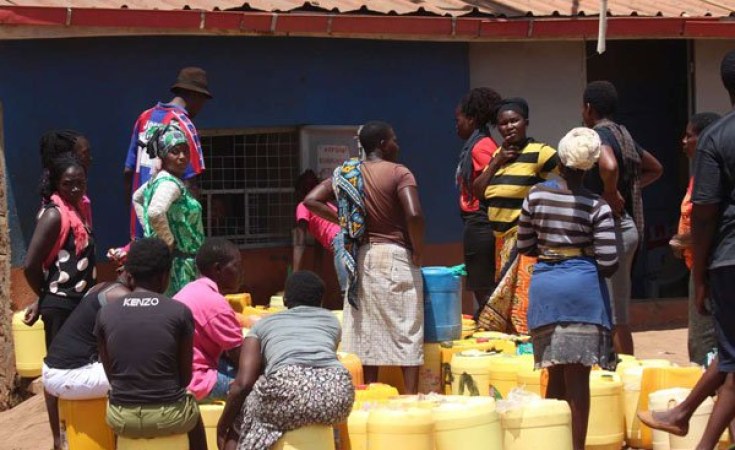 Kanyiri Wahito/Daily Nation
Residents of Kawangware in Nairobi wait to buy water from a local vendor following a shortage during the dry season (file photo).
The Nation (Nairobi)
By Collins Omulo and Brian Okinda

Nairobi County residents will, for a while longer, continue to endure water rationing despite the heavy rains.

The city started rationing water in January 2017, the most affected areas including Lang'ata, Umoja, Githurai and Zimmerman.

Not much is expected to change soon.

Ms Kangogo explained, however, that the measure is not the result of lack of water; she said water treatment systems can only process 526,000 cubic meters daily against a demand of 790,000.

It is estimated that demand increases by 20,000 cubic meters annually.

"The [system] requires that we treat water before releasing it. There will always be a deficit since we cannot release water directly from the source to consumers," she said on Wednesday, adding the county cannot do much until the installed production capacity is expanded.

Ms Kangogo added that some areas lack water due to interruptions for routine maintenance and infrastructure improvement by the Nairobi City Water and Sewerage Company.

"We can also have interruptions arising from damages, leakages and sewer-bursts, which cause water from drainages to flow into conveyor pipes. To avoid these, we occasionally shut supply for repairs in order to prevent contamination," she said.

A spot-check by the Nation revealed a worrying trend as residents seek solutions.

Some areas have seen invasion by vendors and boozer operators who sell water whose sources are unknown.

For Beryl Awuor, a resident of Umoja Innercore in Nairobi, access to tap water for domestic use has been a challenge since 2017, when her mother moved to the area.

Ms Awuor said she had to find contentment in the supply of tap water on just one day every week.

She and her neighbours only get the precious commodity on Sunday so they store as much of it as possible to cater for the rest of the week.

"My family stays up very late into the night on this day waiting for the water. Missing it means a struggle throughout the week as we use the little we buy from vendors," she said.

Ms Awuor, whose house uses at least 50 litres per day, said that when the water does not flow on Sunday, they spend at least Sh150 daily buying it from vendors, who arbitrarily hike prices, making an easy killing.

"We do not know where they fetch the water but since hard situations demand coping, we make do with what we get."

The mother of three, whose house uses at least 100 litres of water daily, also has to be content with a single day of tap water every week.

The taps in her neighbourhood only have water on Wednesday, sometimes until the early hours of Thursday.

"We supplement with borehole water, which we buy at Sh5 for 20 litres, but we cannot trust that it is clean enough so we only use it for cleaning," she said.

"With no ammunition at our disposal, we only complain within our hearts, not sure who to protest to or if our grievances, loud or silent, can lead to change."

The rains, she said, should mean enough water to assuage the situation but no solution appears forthcoming.

Nevertheless, Ms Kangogo assured residents that Nairobi plans to curb the deficit by acquiring at least 140,000 cubic meters from the Northern Water Collector Tunnel that is expected to be complete early next year.

"We will have a 14-million-litre tank at Embakasi Barracks to address the bulk of the deficit. We will be fine by mid next year," she said.

She urged residents to, in the meantime, acquire good storage facilities and take advantage of the rains and supply in their estates.

"Contact our officers when there is any suspicion of water contamination. They'll test it for free to confirm if the water is clean. If it requires additional treatment we will facilitate," said she added.

Floods Kill Over 20 in Western Uganda, Several Missing
Tagged:
Copyright © 2019 The Nation. All rights reserved. Distributed by AllAfrica Global Media (allAfrica.com). To contact the copyright holder directly for corrections — or for permission to republish or make other authorized use of this material, click here.