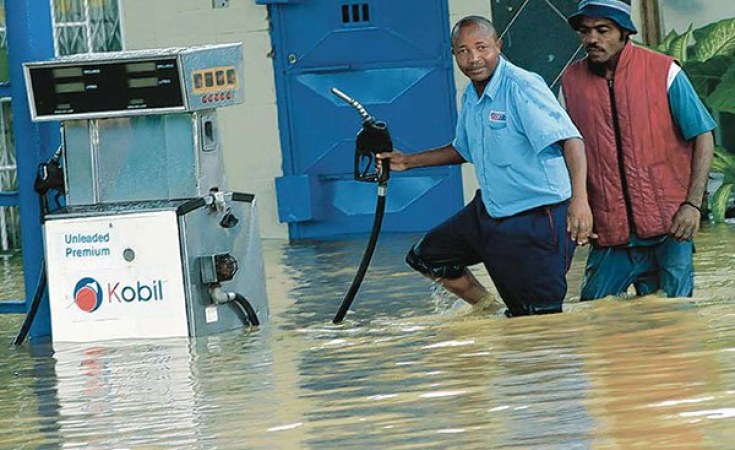 After years when drought threatened Kenya's economic future, and imperilled many communities, the story has changed.

Now, it's the opposite. Several parts in western and central Kenya are being swept away by floods. And Nairobi too, this week, was overwhelmed.

The big story in Kenya of the past few weeks was (and remains) the Building Bridges Initiative, which follows from the famous March 9, 2018 handshake between President Kenyatta and opposition leader Raila Odinga.

There was a lot of jumping up and down about what the BBI report, which was largely aimed at uniting the country, was going to say. But when it finally came out a few days ago, it wasn't surprising that it dealt mostly with distributing the political pie.

However, as the mayhem of the floods that was playing out as the BBI report was unveiled, perhaps Kenya's existential problem today is not its failure over the decades to divvy out the political spoils fairly. It is how it manages its environment, and the growing threats that many attribute to climate change.

The BBI report does not, even once, address itself to the environmental challenge Kenya faces and how politics might be rearranged to deal with the threats.

But Kenya, and indeed the rest of Africa, will very soon have to put this at the end of their agenda. A few days ago, the COP25 climate summit got under way in Spain, to the soundtracks of the worst floods, and droughts and fires from Brazil, California in the US, Australia, to our own central African grasslands. There have been floods from Venice, London to Nairobi.

In fact, while the spotlight was on the Amazon fires, the African ones covered a larger area at 3.3 million square kilometres, running through several countries.

And in Kenya, there were the record-setting Mt Kenya wildfires.

In the East African Community zone alone, floods in Kenya and Uganda have swept away millions of dollars' worth in infrastructure -- roads, bridges, schools and electricity lines -- and wiped away, perhaps, even more in private investments in farming, housing and livestock.

And, the biggest casualties, human life. With more than 50 people killed just in recent days, floods in Kenya today are more dangerous than terrorism.

We are at, or near, the point where the question of how to "bring development" is at par with "how to protect development against climate ravages".

To reform politics for the times, it's first important to appreciate that it is geared to creating environmental ruin.

Politicians looking for votes in increasingly contentious elections will encourage voters to encroach on forests and cut down trees, farm and settle on wetlands, and allow their backers to cut corners while developing housing estates in the towns.

In the southern Ugandan district of Mukono, a loyal local official in the ruling National Resistance Movement (NRM) some years back decided enough was enough. Some order was needed on Lake Victoria to protect the broader interests of the farming community, whose business was shrinking.

He came down on the use of small fishing nets and created fallow zones so that stocks could recover.

It worked in the first round when he imposed the controls. Midway in the second round of the fallow, the election of 2021 approached.

A few greedy fishermen went and told NRM officials working for President Yoweri Museveni's re-election that their man at the Mukono lakeside was barring them from fishing, so they weren't going to vote for the 'Big Man'.

We shall return at the end to what happened next.

The long and short of it is that we need to think very differently. It used to be that a house on the hill was more prestigious. But it is getting more difficult to have water up there, and the degradation on the hillsides is imperilling life in the skies.

For big farmers, the valleys were lucrative, gathering rich soils, and water was plentiful. Today, they are silted over or flooding badly.

How power is divided is important because it determines whether a country will have leaders who make policies for these climate-challenged times. However, you can't do that unless you first figure out that you have to.

So, we return to Mukono.

After greedy fishermen complained about the environmentally diligent ruling party local official, political heavyweights descended on the lakeside fishing town and told the chap to back off. He did. And Museveni got his votes.

Result? Today, in several of the nearby fishing villages, commercial sex is a more lucrative business than fishing.

The author is curator of the "Wall of Great Africans" and publisher of explainer site Roguechiefs.com.

Previous Story
Floods Could Spike the Cost of Water Treatment in Kigali
Next Story
Explainer - Floods? Here's How to Keep Safe

Floods Could Spike the Cost of Water Treatment in Kigali

Floods Kill Over 20 in Western Uganda, Several Missing
Tagged:
Copyright © 2019 The Nation. All rights reserved. Distributed by AllAfrica Global Media (allAfrica.com). To contact the copyright holder directly for corrections — or for permission to republish or make other authorized use of this material, click here.