Kenya: Mine, All Mine - Rock Quarrying Fuels Land Disputes in Kenya 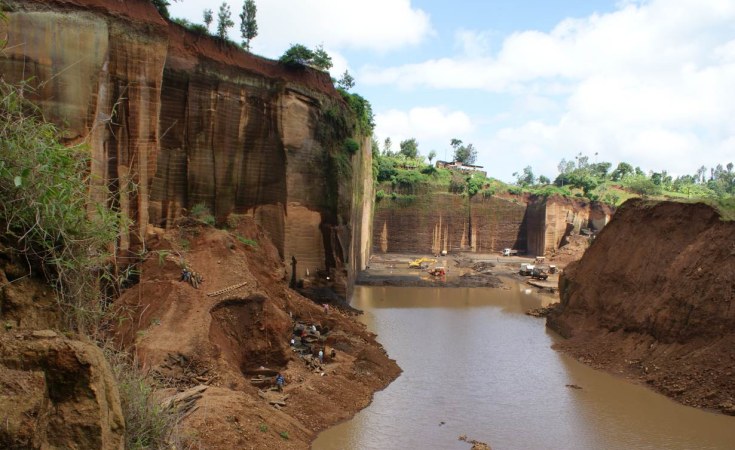 Kibingo, Kenya — Once worthless rocks are now big business in rural Kenya as construction booms, but the rush for rocks is also fuelling land conflicts and family divisions

When Jotham Micheni and his brothers were divvying up their family land in central Kenya after their father's death, nobody wanted to take the barren patch on the eastern flank.

The five sons of the farming household in rural Kibingo village, about 130km (80 miles) northeast of Nairobi, all feared being given the rocky land they knew would be unsuitable for growing food crops.

As the youngest, and therefore the last to choose, Micheni ended up with the plot.

Five years on, he is making more money from that one-eighth of an acre of rock-filled land than he does growing and selling maize, potatoes and beans - and now his brothers are desperately vying for what they say is their share.

"I used to think land where there is only rock is wasteland," Micheni said, digging up chunks of granite and basalt that he will sell to road construction contractors for about 10,000 Kenyan shillings ($100) per truckload.

"Now I am learning that nothing is worthless."

Demand for rock material to construct roads and buildings around Kenya is skyrocketing, say villagers and contractors, providing an alternative source of income for farmers who face continued failed harvests, largely due to worsening droughts.

But the rush for rocks is also fuelling land conflicts and divisions among family members, locals and village chiefs told the Thomson Reuters Foundation.

"(My brothers) have threatened to beat me up if I do not let them mine my rock," said 42-year-old Micheni.

Kenya is going through a construction boom, with data from the country's competition authority showing that the extraction of stone, sand and gravel has helped the construction sector's contribution to GDP jump from 5% in 2015 to about 9% today.

But the practice is becoming more popular around the country as farmers struggle to grow enough crops to make a living, he added.

Micheni said he can make at least 20,000 Kenyan shillings ($200) a month selling the rocks he mines on this land, double what he earns every few months growing and selling maize and beans.

Communities throughout Kenya are struggling with the effects of climate change.

Quarrying rocks has changed some farmers' fortunes, who collectively account for about a third of Kenya's annual economic output, according to Ong'are.

But this alternative revenue stream is not hassle-free.

Rocky areas of land that have remained idle and neglected for years are now becoming a trigger of land and inheritance disputes among family members in rural Kenya, say local leaders.

Assistant police chief of the Tharaka Nithi administration Lawrence Micheni told the Thomson Reuters Foundation that his office has seen a rise in the number of disputes over land in the past five years, and some of those cases revolve around quarry mining. 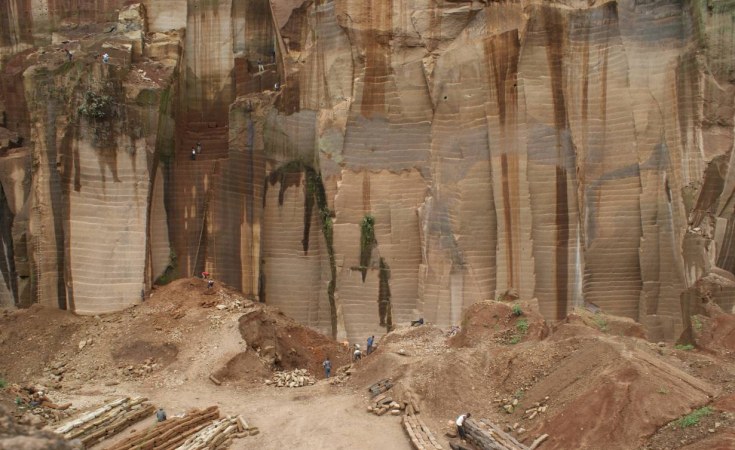 Across the country, cases concerning succession and inheritance - most of them involving the right to land - made up about 40% of all legal disputes, a 2016 national survey found.

No data yet exists for disputes due specifically to quarry mining in the region.

Njue Njagi, a Tharaka Nithi government official for agriculture, noted that disagreements over who can profit from the rocks often turn violent.

"The land disputes can be bloody," he said, adding that the government is trying to curb these conflicts by training farmers to form quarrying cooperatives to help them manage and share the resources.

The cooperatives organise farmers into groups, he explained, and the county government helps the groups obtain loans from local banks.

The farmers can use that money to buy equipment, hire help and pay marketing professionals to make sure they get a fair price for their rocks without being undercut by brokers, he noted.

They can also prepare for a future when their land runs out of rocks by using the group's savings to turn exhausted quarries into water pans where they can store water for irrigating their farms, Njagi added.

IT'S A HARD ROCK LIFE

Part of the problem is a lack of clarity on who has rights over smallholder land that is being used for rock mining, said Tharaka Nithi's governor Muthomi Njuki.

He told the Thomson Reuters Foundation that all mineral mining sites are classified as public land under the Kenyan constitution.

The government has the right to buy any land that is found to contain large mineral reserves and relocate anyone living there, said Njuki.

But the law is less clear on whether small quarry sites on private farmland should be classified as public land, Njuki noted.

That uncertainty can cause tensions between those with small quarries on their land and other members of the community who feel they have a right to those resources.

"That is why we are seeing these conflicts over quarrying, because even if a member of the family claims the quarry site is on his side of the land, others can claim that this is a (public) resource and so it should be shared," he said.

Micheni, the farmer in Kibingo village, said his brothers are insisting the quarry site on his rocky patch of land counts as public land and therefore they should have a cut of any money he makes from it.

But he does not want to lose the chance to exploit the once unwanted rocky patch of land that is now providing a stable income to support his family.

"Should I listen to them?" he asked.

"Or should I focus on making as much money as I can by digging rocks to recoup what I lost due to failed rains?"

For now, he is holding on to his land. "As you can see, I am still in business," Micheni said, proudly gesturing to the pile of rock debris stacked by the roadside.