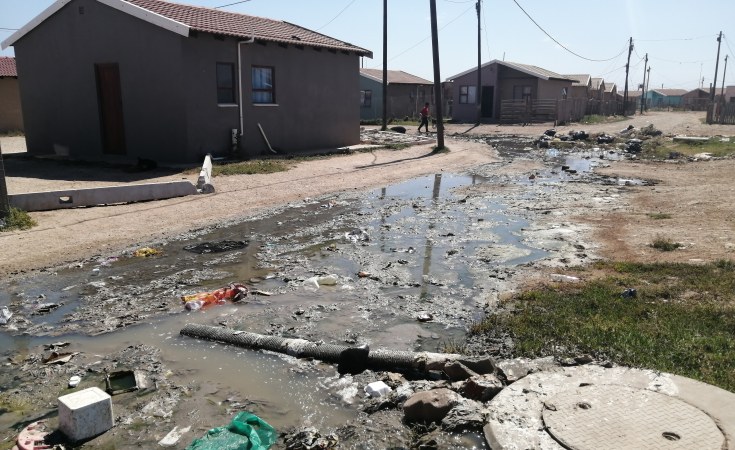 The Nelson Mandela Bay Municipality has admitted that it has "serious infrastructure problems" amid complaints by several communities of recurring blockages.

Sewerage drains have been overflowing in townships and rivers, posing a serious health risk to residents and animals. For many years the municipality has been shifting the blame to illegal dumpers. But early this year, recently ousted mayor Mongameli Bobani, allocated R40 million to clean up illegal dumping and littering.

Residents of Soweto-on-Sea and Missionvale have been calling for the replacement of their sewerage pipes to stop the regular blockages which they say has turned their townships into pigsties.

From Old Uitenhage road near Smartie Town to Missionvale, three blocked drains have overflowed into the Aloes Valley. In Soweto-on-Sea, residents of Hlanganani Street say they have experienced blockages regularly, often days after it was fixed.

Nosiphiwo Mafilika of Soweto-on-Sea said: "It's been three years that sewage overflows here. Municipal officials fix it today but tomorrow it is blocked again. Due to this continuous overflow the road has been damaged. The stream of sewage goes until Soweto-on-Sea Primary School."

As a result, residents have to tiptoe around the smelly puddles to get into their homes. Resident Mzimkhulu Mena of Missionvale said: "For three months we have been battling to breathe because of these blocked drains. The whole place is just stinking poo."

Teslin Booysen DA PR councillor said his office is inundated with complaints of the blocked drains every day. "I don't get less than 50 blocked drains reports per week. The whole township is disgusting. The problem here is that sewerage pipes are too small and the population is growing rapidly. We need bigger pipes that won't block easily," he said. Booysen criticised the municipality for "taking too long" to respond to complaints.

Browny Mnune a cattle herder in the area said, "My cows have been grazing near Chatty River since 2012. These drains have been overflowing since then. The drains get blocked every month and overflow into the river." He is worried that his cows were drinking polluted water.

Mayoral spokesperson George Geleba said the only reports of blockages on record were made between 15 to 27 November. "We will send our Sanitation Team to investigate what the main cause for these continuous blockages ... We can't shy away from the serious infrastructural challenge in some areas of the metro. Nevertheless, we work around the clock to maintain and renew our infrastructure to ensure convenience to our residents," he said.

Geleba urged residents to report blockages to their operational line on 080 0205 050. But by Thursday afternoon the drains were still overflowing in the community.