The final casualty in the Tau Lekoa mine disaster near Orkney, North West, has been located and was being retrieved, Village Main Reef Limited confirmed on Sunday.

According to the company, the four workers who died were Xolani Meva, 42, of Elliotdale and Lungile Nyawose, 32, from Lusikisiki, both drillers with 11 years of service; Katleho Nthibane, 47, from Bloemfontein, a team leader with 18 years of service; and Karabo Mabuthile, 35, a driller from Fochville with two years of service.

Only one mineworker survived the incident in the gold mine near Orkney.

He is in a serious but stable condition after being rescued soon after the rockfall, which occurred as a result of seismic activity in the mine that afternoon.

National Union of Mineworkers (NUM) spokesperson Livhuwani Mammburu said it had been a "sad experience" to see the casualties brought to surface after losing contact with them on Friday afternoon, as they struggled to breathe.

Mammburu said team leaders and winch drivers were stopped by a proto team from rescuing the remaining four, but conceded that he didn't know whether this was owing to safety concerns.

These highly competent and professional workers were angered that they had not been able to try and save the rest of their colleagues, he maintained.

The bodies of three of the four trapped mineworkers were recovered by rescue workers on Saturday evening.

More than 100 people - volunteers from the company's own workforce, as well as specially trained rescue teams from Mines Rescue Services - have been involved in the rescue, some 1 350m below the surface, dealing with difficult conditions because of the volume of fallen rocks and the threat of further rockfalls.

Duncan previously told News24 they would not respond to any allegations about safety until the Mine Health and Safety Inspectorate investigated the circumstances.

CEO Owen O'Brien expressed gratitude to those who assisted and continued to assist in "dealing with the various consequences of Friday's event", particularly employees, rescue team members, union officials and representatives of the Department of Mineral Resources and Energy. 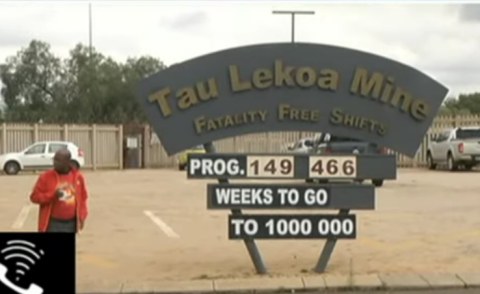 Four Bodies Recovered After Rockfall in South African Gold Mine
Tagged:
Copyright © 2019 News24Wire. All rights reserved. Distributed by AllAfrica Global Media (allAfrica.com). To contact the copyright holder directly for corrections — or for permission to republish or make other authorized use of this material, click here.