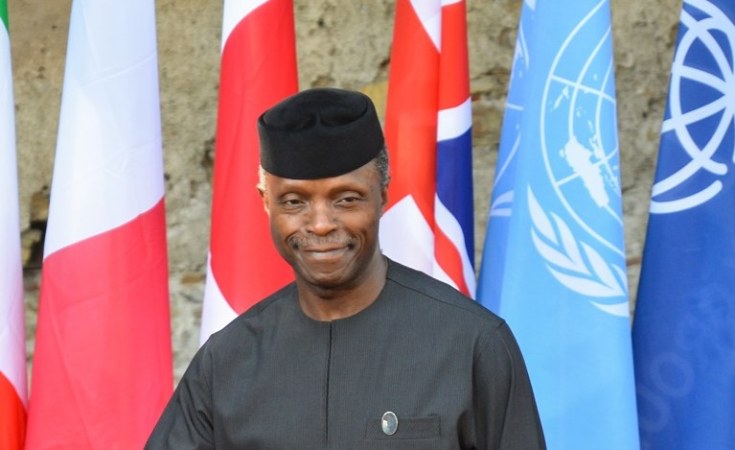 "Only acts of deep humility and personal sacrifice can root out intolerance, bigotry"- VP

In a world increasingly plagued by activities of the agents of intolerance and religious extremism, it will take acts of deep humility and personal sacrifice, especially by leaders across board, in order to change the disposition to hate and prejudice, according to Vice President Yemi Osinbajo, SAN.

Prof. Osinbajo stated this on Monday in a keynote address he delivered in Abu Dhabi at the opening session of the Sixth Assembly of the Forum for Promoting Peace organized by the government of the United Arab Emirates.

Speakers and participants at the conference were drawn from across the world, including countries like the United States, and there were representatives of Christianity, Judaism and Islam. Among representatives from Nigeria were the Catholic Archbishop Emeritus of Abuja, John Cardinal Onaiyekan, and the celebrated Imam from Plateau State, Abubakar Abdullahi.

The Vice President was also received after the opening session by both the Crown Prince of Abu Dhabi, Sheik Mohammed Bin Zayed Al Nayan, and the Ruler of the Emirate of Dubai, Sheikh Mohammed bin Rashid Al Maktoum, who is also the Vice President, Prime Minister and Defence Minister of the United Arab Emirates.

The reception was at the Al-Ain Palace of the Crown Prince, who is also the Deputy Supreme Commander of the United Arab Emirates Armed Forces.

According to the Vice President in his keynote address, "no amount of words or platitudes can change the human predisposition to prejudice and parochialism. Only acts of deep humility and personal sacrifice can.

"There is no question at all that this is the responsibility leadership places on those of us who are religious and political leaders in our countries.

"It is my respectful submission that the burden rests squarely on leaders, especially religious and political leaders, and others we may describe as the elite in our nations and communities."

Continuing on the role of leaders of communities in promoting peaceful coexistence, Prof. Osinbajo said, "it is our role not only to articulate, as we are doing in this assembly today, the theoretical and doctrinal foundations for a more tolerant world, but more importantly, to make the personal sacrifices that would compel our societies to commit themselves to lifestyles of tolerance."

Speaking on how technology and globalization can also been used in promoting hate and intolerance, the Vice President said leaders who exemplified selflessness and love are better positioned to reverse the negative trend.

"In recent years, we have witnessed a rise of religious extremism, right wing populism and ultra-nationalism. We have seen extremists hijack the symbols and letters of the faiths and use them to prosecute violent campaigns that violate the sanctity of human life on a global scale: ISIS, ISWAP, Boko Haram etc.

"Therefore, if we are to prevent an endless cycle of strife and conflict, tolerance is a necessity."

The Vice President added that it was the responsibility of leaders, "especially religious and political leaders, and the elite in our nations and communities, to bear the torch of tolerance and illuminate new pathways to a shared future."

Citing the examples of some community and religious leaders in Nigeria who offered their lives to save people of different faiths from theirs, Prof. Osinbajo urged leaders of groups and communities to imbibe the principles of tolerance and empathy.

"We must emphasize the central place of the principle of empathy; this is a thread that runs through our moral traditions, and is summed up in the Golden Rule in the words of Jesus Christ where he said, "do unto others as you would have them do unto you." Jesus Christ goes further to say that "we must love our enemies; we must even pray for our enemies."

"This is the notion of self-sacrifice. In other words, all of these is summed up in the general principle that we must treat others as we ourselves would like to be treated, and this is embedded in the Abrahamic traditions and other major religions."

Earlier, the UAE Minister of Tolerance, Sheikh Nahayan Al Nahayan, spoke on the need for the world's major religions to embrace tolerance as a virtue and vehicle to promote peaceful co-existence.

Tagged:
Copyright © 2019 Government of Nigeria. All rights reserved. Distributed by AllAfrica Global Media (allAfrica.com). To contact the copyright holder directly for corrections — or for permission to republish or make other authorized use of this material, click here.