Somalia: The Various Layers to the Somaliland-Puntland Discord 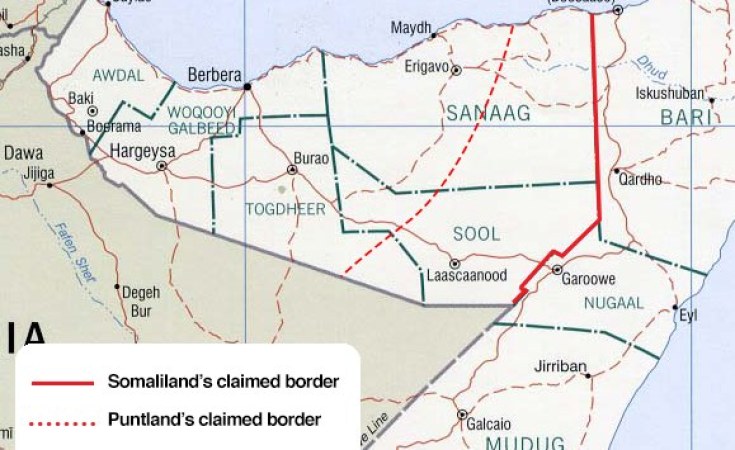 Tensions between Somaliland and Puntland have increased over the past two years, with risks of further instability and militarisation if not adequately addressed. The discord centres on competing claims to the Sool and Sanaag (and Cayn) regions by the self-declared independent entity of Somaliland and the autonomous Puntland state of Somalia. Unless differences can be addressed on all levels - local, regional and national - the issue is unlikely to be resolved.

In early 2018, heavy fighting around the town of Tukaraq in Sool led to the advance of the Somaliland military and retreat of Puntland forces. This year the hitherto relatively spared Sanaag region saw an increased build-up of military forces from both sides.

The long-standing territorial disagreement between Somaliland and Puntland is a legacy of both European colonialism and Somali state collapse. The conflict plays out on many different levels, with an intersection of local, regional and national political dynamics. The failure to make progress at each layer is stopping overall resolution.

The Institute for Security Studies (ISS) conducted research in Somaliland and Puntland to explore the dynamics around the Sool-Sanaag dispute. It interviewed government officials and Dhulbahante and Warsengeli clan representatives, given that the problem primarily involves their home areas.

At a local level, the Dhulbahante and Warsengeli clans have been divided by the dispute. Some political leaders have moved back and forth between Somaliland and Puntland, based on where they can most gain.

A reduction in violence and militarisation should be short-term objectives, but tied into a longer-term approach

This 'borderland entrepreneurism', in the words of prominent academic Markus Hoehne, seems to have affected the Dhulbahante more than the Warsengeli, given the latter's greater focus on working with both sides. But interviewees said as long as the competitive policies of Somaliland and Puntland remained, this dynamic would continue, hindering efforts at resolution.

At a regional level, Somaliland and Puntland clash over the legitimacy of their respective formations. Somaliland claims territorial control that adheres to its colonial boundaries, which would include Sool and Sanaag (and the contested Cayn area). Puntland however offers a political administration for the Darod/Harti clan, which would include the Dhulbahante and Warsengeli, both present in Sool and Sanaag (and Cayn).

Most Dhulbahante and Warsengeli representatives interviewed by the ISS expressed a strong desire to remain united with Somalia. In this sense, Somaliland's pursuit of independence was considered a red line that many didn't want to cross. Yet neither have they always wanted to associate with Puntland, and both clans have experimented with setting up their own political administrations in the past. This shows a level of discontent with all current options.

At a national level, Somaliland's unresolved status regarding its independence claims regarding Somalia remains an issue. Without progress regarding this dynamic, Somaliland's border with Puntland will always be questioned. In addition, many Federal Member States have increasingly distanced themselves from the Federal Government of Somalia recently, at a time when some Dhulbahante and Warsengeli are advocating for a closer association.

Thus the dispute over Sool and Sanaag manifests itself at all levels - from local clan dynamics to regional conflicts between Somaliland and Puntland through to national-level politics. Each layer has its own internal complications that hinder resolution efforts going forward.

After the 2018 violence in Tukaraq, the Intergovernmental Authority on Development (IGAD) and United Nations Assistance Mission in Somalia (UNSOM) began shuttle diplomacy efforts between Hargeisa and Garowe to prevent further violence. These efforts have produced an informal ceasefire - no major violence has occurred in Sool since mid-2018. Yet the increased military build-up in Sanaag hasn't been addressed, an area which previously had been a bit more insulated from the Somaliland-Puntland conflicts.

The IGAD/UNSOM efforts must continue, but for any sustainable non-violent resolution to occur over Sool and Sanaag, both short-term and long-term options should be pursued. In the short term, there is a need to both formalise the non-use of violence and initiate confidence-building measures based on present dynamics.

Commercial traffic along the main route connecting Somaliland and Puntland through Sool, for example, has continued despite the ongoing dispute. The presence of continued economic and social ties across the divide could be used to reduce prevailing political tensions, and further bind the regions together.

In the long term, both serious discussion and creative thinking will be required to move beyond the status quo. Consultations between Somalia, Somaliland and Puntland may be necessary once the area has been stabilised. The specific mechanisms to pursue such discussions would need to be worked out, but it is clear that all interested parties would need to be adequately consulted and involved.

Also, any long-term resolution cannot sustainably occur without the input of the Dhulbahante and Warsengeli communities themselves. An internal consensus might need to be reached first, or some sort of popular consultation or referendum could be considered. Again regardless of the specifics, what is clear is that no resolution on the future of Sool and Sanaag can occur without local input.

In many ways, the Sool-Sanaag dispute represents the different visions regarding the reconstruction of the Somali state, enveloping the range of options from the independence demanded by Somaliland, to the significant autonomy preferred by Puntland, to the federal unity advocated by the involved clans.

The complication lies in the various levels in which this plays out, and the need to for an integrated approach between them. This further complicates a tense situation, and will require political will and creative methods to overcome and avoid future violence.

Any resolution to the Sool-Sanaag dispute is likely to be a long-term affair. A reduction in violence and militarisation should be short-term objectives, but tied into a longer-term approach. Nonetheless, while this is a complex and difficult situation, the presence of positive local ties through trade and people-to-people connections can perhaps be something to build on, so that the next generation of Sool and Sanaag residents don't suffer from the failings of the present.