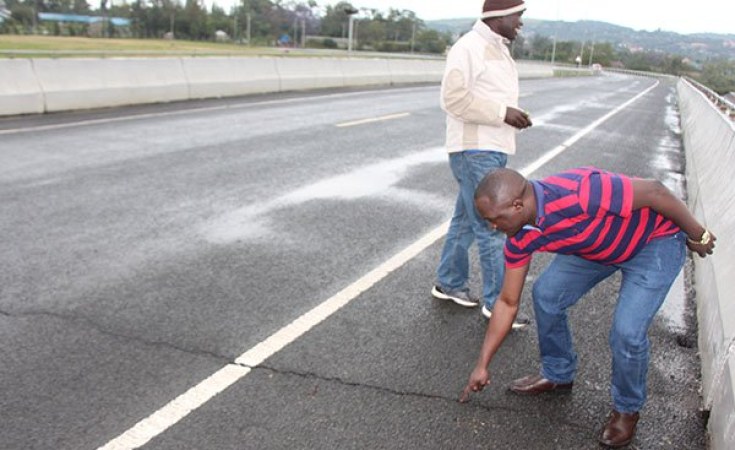 Photo: Richard Maosi/Daily Nation
A man shows one of the cracks that have developed on the newly built Njoro interchange turn-off along the Nakuru-Eldoret highway.
The Nation (Nairobi)
By Eric Matara

Huge cracks have developed on the newly built Njoro interchange turn-off along the Nakuru-Eldoret highway, sparking fears that it could collapse.

The visible cracks on two sides of the interchange overpass have caused worries among motorists who fear that it could collapse and affect the flow of traffic on the busy highway.

The interchange is used by motorists from Eldoret heading to Njoro town and those from Njoro going to Nakuru town.

Motorists now want the Kenya National Highways Authority (KeNHA) to intervene and establish the cause of the cracks to avert a disaster.

"The cracks suddenly started developing slowly last week and they are now visible. We fear that this may lead to a disaster. We need urgent intervention of KeNHA engineers to establish the cause and fix it," said a driver, Mr Simon Kemboi.

Another motorist, Mr Geoffrey Nyangeso, who uses the road daily to and from Njoro, also said the cracks on the new interchange are scary.

"The cracks are a ticking time bomb and the government must act with immediate effect or else we might just be staring at another disaster," he said.

But in a statement seen by the Nation, KeNHA allayed fears of a looming disaster, saying the cracks are normal.

"The matter has been raised but we wish to state that the cracks are as a result of the expansion joints on the interchange as there are with many other structures," read the statement by KeNHA posted on its official Twitter handle.

When the Nation reached out to KeNHA's Assistant Director For Corporate Communications Charles Njogu on Monday, he promised to issue a detailed statement on the cracks.

"I am aware of the matter and we have already issued a detailed statement, which we shared last week with Parliament. I will provide you with necessary details today," said Mr Njogu.

The interchange and two others built along the busy Nairobi-Nakuru-Eldoret highway are expected to greatly ease the perennial traffic flow, even as the key road is set to undergo further expansion.

The interchanges have been built at the Njoro and Nyahururu turn-offs.

A similar interchange is also complete at the Mau Summit-Kericho turn-off, along the same highway.

The multi-billion projects were funded by the World Bank and supervised by KeNHA.

The Njoro and Nyahururu turn-off interchanges have already spruced up the face of Nakuru as it seeks to acquire a city status.

According to KeNHA, the interchanges were meant to reduce traffic snarl-ups along the route as well as reduce transport costs.

"The projects were part of the authority's activities aimed at improving the state of highways in the country. They were also meant to give residents, businessmen and travellers a sigh of relief from years of perennial traffic gridlocks along the busy highway,"said Mr Njogu in a previous interview.

The interchanges are part of the Jubilee government's vision 2030 key projects aimed at helping to cut the hours wasted on the jams on most roads in the country.

Motorists along the Nairobi-Nakuru-Eldoret highway have frequently blamed KeNHA for heavy frequent traffic jams along the road.

Traffic snarl-ups, sometimes stretching to almost five kilometres on both sides of the highway, are a common phenomenon, often forcing motorists to use alternative routes.

For instance, private cars, public service vehicles, and even heavy commercials are forced to divert from the highway to avoid heavy traffic jams heading from Nakuru to Nairobi.