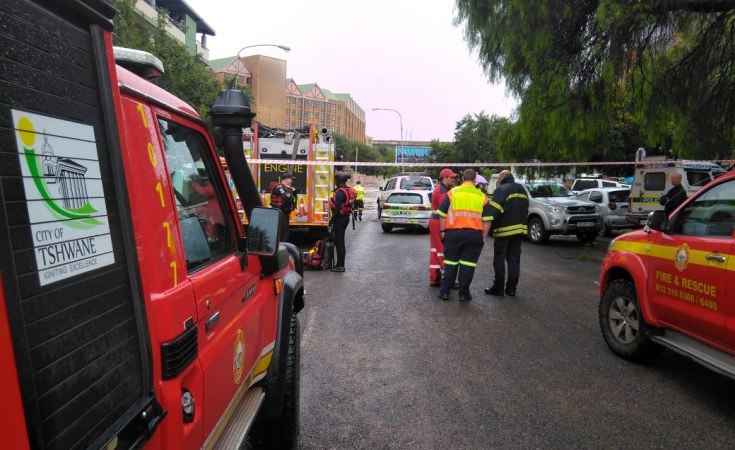 ER24
ER24 and other services are on scene at a hotel in Centurion CBD where approximately 70 people are trapped.
News24Wire (Cape Town)
By Sesona Ngqakamba

Gauteng residents can brace themselves for more heavy rainfall until Wednesday, the SA Weather Service says.

This as widespread flooding has hit the province, with several motorists and residents in Centurion and Mamelodi left stranded.

"There is still rain expected for today and tomorrow. We have 80% chance for Tuesday again in Gauteng," forecaster Kgolofelo Mahlangu said.

"There is an upper trough system sitting on the upper parts of the atmosphere and bringing moisture from the subtropics of the continent into our region. This is why we have so much rainfall," Mahlangu said.

From Wednesday, normal 30% isolated showers were expected, she added.

There will be showers in North West, Free State, Limpopo, Mpumalanga and KwaZulu-Natal as well. Mahlangu said, from Tuesday, the system would also shift slightly eastwards, while still covering the Gauteng region.

"By Wednesday it will shift even further eastwards to cover the coastal areas. It will cover extreme eastern parts of Free State and Gauteng."

Earlier on Monda,y several motorists were rescued after being trapped following flash floods around Centurion, while hundreds of shacks in Mamelodi were also under water.

An evacuation of guests and staff was conducted at the Centurion Lake Hotel after its parking lot and reception area became flooded.

At about 20:00 on Sunday, the National Sea Rescue Institute (NSRI) was activated to Hartbeespoort following reports from the Strategic Response Rescue Unit of a vehicle swept of a low-lyinng bridge by flash floods on a tributary of the Crocodile River in Welgegund.

Dlamini-Zuma and Maile to Visit Areas Affected By Flooding