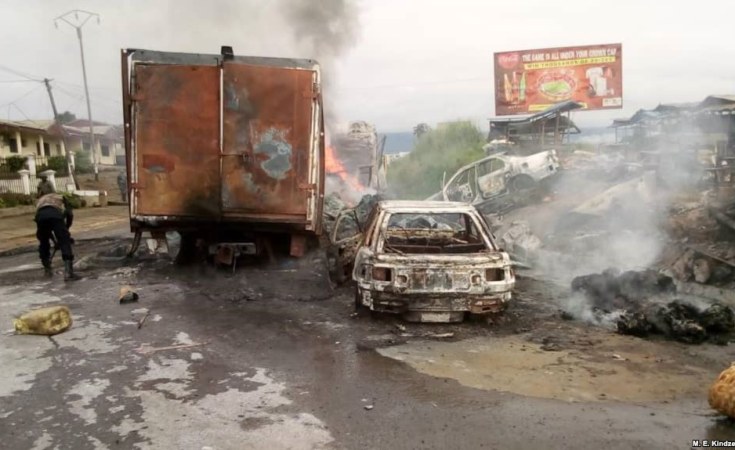 The event in Bamenda was the distribution of more special assistance to some 800 families escaping violence in the North West region on November 21 and 6th December, 2019.

Mattresses, blankets, rice, savon and buckets were the items delivered to some 800 families, representing 4,000 people in Bamenda on November 21, and December, 2019. Each of the families also took home FCFA 10,000 in support , summed up in special humanitarian assistance from the government through the Ministry of Territorial Administrstion for the Internally displaced families, haunted by the ongoing socio-political and security crisis rocking the region. Delivering the items at the upstation neighbourhood, the Permanent Secretary in the Governor's office, Viang Mekala said it was a regular weekly exercise to support and give hope to IDPs whose frustrations are the concern of the government. He said the items were strictly for affected families and urged beneficiaries to receive the items with the accompanying message of love and solidarity from the Head of State who cares. The Permanent Secretary inspired beneficiaries to be actors and apostles of peace in their families, communities and especially to those still fighting in the bushes. He urged them to continue to stand by the institutions of the nation and use the items received to restore their dignity and cope with difficulties of shelter and feeding. He said that the gesture in support is meant to help matters for the frustrations of many who escaped their homes and villages for no fault of theirs and warned those who may turn the assistance into a business. It was in appreciation that beneficiaries received the assistance with the Head of Mission from MINAT, Paul Anchang around to ensure superintendence.

Previous Story
Tagged:
Copyright © 2019 Cameroon Tribune. All rights reserved. Distributed by AllAfrica Global Media (allAfrica.com). To contact the copyright holder directly for corrections — or for permission to republish or make other authorized use of this material, click here.