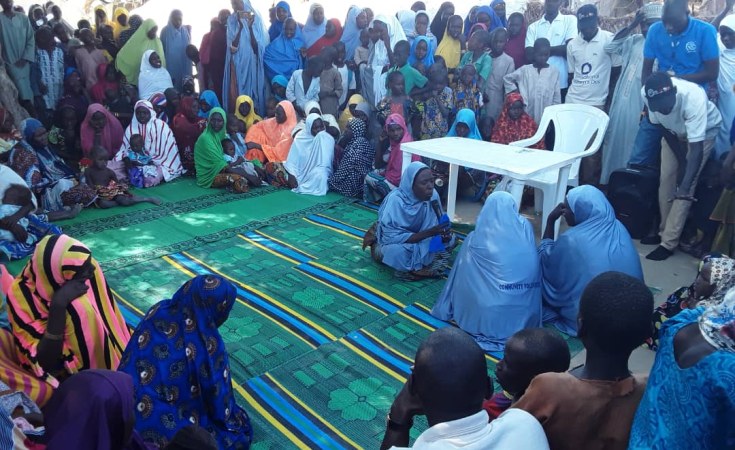 As part of activities to commemorate the #16daysofactivism, Plan International Nigeria, Maiduguri office, conducted series of activities aiming at raising the awareness of Internally Diplaced Populations in Maiduguri.

The campaign targeted adolescent girls and women living within the community. There were sessions of advocacy and sensitization as part of the #SayNoToRape campaign. They were sensitized on dangers, effects and the reporting mechanism for Rape survivors.

While urging the women and adolescent girls to speak out, Ms Damaris, GBV officer also reiterated why it is imperative for survivors to seek mediacal attention on time. “A lot of health risks are involved” she said. “Once it happens, you should first seek for medical attention to avoid risks such as Stds, pregnancies, HIV, etc. There are emergency treatments that if given on time, can prevent us from such risks” she added.

The campaign continued in Bolori 3 area of Maiduguri. There were activities like, role play by community volunteers (adolescent boys and girls) on rape, encouraging them to open up on the silence on rape and molestation. They were advised to report to appropriate authorities , or to community volunteers and case workers.

The campaign began with advocacy and senitization on the theme #SayNoToRape at Cenrtal Primary School Dikwa. Adolescent girls carried placards, while adolescent boys joined in the campaign and advocacy, also carrying placards with inscriptions that spoke against rape.There was a role play by adolescent pair group centered on rape , some boys were also part of the role play. The role play was centered on the effects of rape, which were unwanted preganancy, school drop out and sexually transmitted disease.  Other discussions were centered on rape prevention and child marriage. Participants were also encouraged to show love and support to rape survivors.There was a cultural dance display by the adolescent pair group.

Another team led by a case worker in Maiduguri, conducted activities in Monguno Local Government of Borno State,  to create awareness and sensitization at Central Junior Secondary Monguno.  The sensitization targeted boys, girls and their teachers inclusive. Discussions during the sentitization were centered  on Child sexual abuse and its Health implication, Psychological and social consequences of rape in schools, etc.

“We were told that child sexual abuse, is the involvement of a child in a sexual activity”, says a young girl participant. “Sexual activities involve kissing in a sexual manner, having sex with the child, showing the child pornographic images, engaging children in prostitution, etc”, she continued.

Empahisis was laid on how to support children who have experienced child abuse, to enable them  feel safe and build trust. They were encouraged to allow such children participate in events and provide a safer environment for them if they are living in an abusive environment.