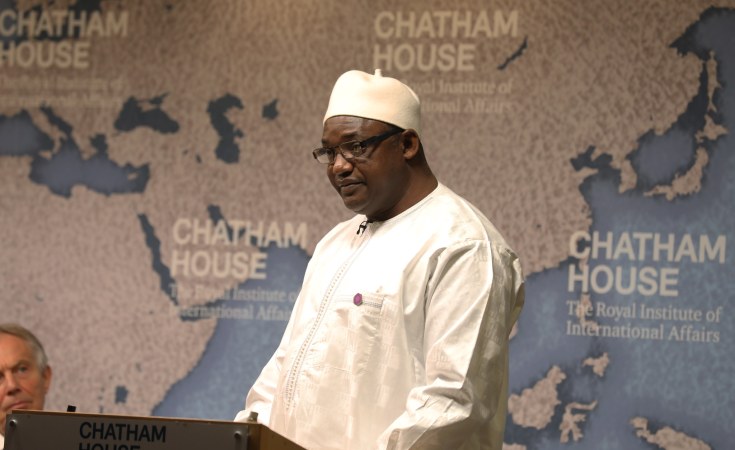 Chatham House/Flickr
Adama Barrow, President of the Republic of the Gambia, at a Chatham House event in 2018.
FOROYAA Newspaper (Serrekunda)
By Mustapha Jallow

Chairman of the Movement Abdou Njie on Tuesday told Foroyaa: "IGP Mamut Jobe ordered the Police to hand over the permit to us this evening at 5pm."

He was quick to shrug off allegations that members of his movement has distributed T shirts to schools for students to join them in the demonstration on 16th December.

He remarked: "We are in fact yet to print T shirts. We are now busy mobilizing our supporters and sympathizers for the day."

According to the permit which is dated 19th November, 2019, the procession shall be held on Monday, 16th December 2019.

It stated, "Please be informed that your request has been meticulously reviewed and this office has decided to grant you approval to hold a peaceful Public Procession on Monday, the 16th of December, 2019 from Sting Corner junction to somewhere 200 metres before Denton Bridge."

"Your procession be conducted the hours of 10:00am and 14:00 hrs.; that your peaceful procession must commence at Sting Corner junction and terminate 200 metres before Denton bridge. You must refrain from uttering any abusive, threatening or insulting words or any behaviour with intent to provoke a breach of the peace or whereby a breach of the peace is likely to be occasioned," it said.

The Police further advised the Movement that their procession must not in any way interfere with rights of other persons in their lawful businesses.

"That you shall be responsible for the identification of any persons whose intent is contrary to the desires of your request," it adds.

According to the Police, members of the Movement will take full responsibility and be held to account jointly in respect of any individual or collective failure to comply with conditions stipulated in the permit.

"such failure will result to the revocation of this permit and or the sanctioning of criminal prosecutions. Your peaceful procession is a linear straight march using the right hand side lane to Denton Bridge," the permit adds.

The Gambia Government Spokesperson Ebrima G. Sankareh has issued a statement assuring members of the public, the business community and members of the diplomatic and Consular Corps of a peaceful and orderly procession, adding that they should go about their normal businesses.

"The safety and security of all is paramount and this permit is in recognition of Jotna's constitutional and democratic right to protest", he added.

Previous Story
Tagged:
Copyright © 2019 FOROYAA Newspaper. All rights reserved. Distributed by AllAfrica Global Media (allAfrica.com). To contact the copyright holder directly for corrections — or for permission to republish or make other authorized use of this material, click here.