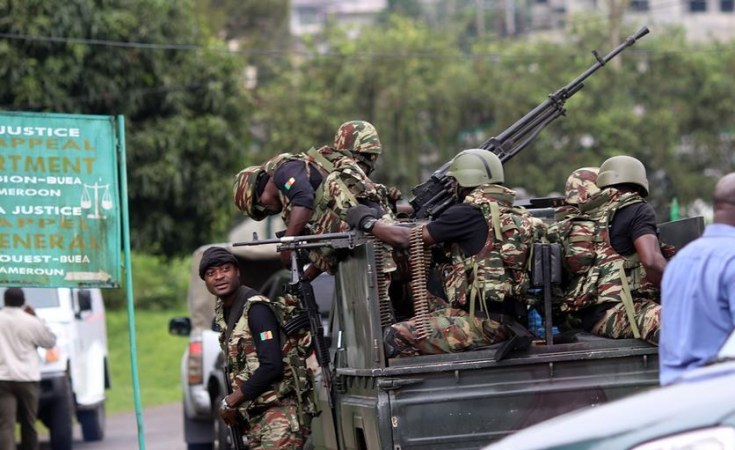 A Canadian university has set up the Database of Atrocities for a part of Cameroon where those seeking independence are facing the wrath of the government. The intiative is intended to prompt the world to act.

The University of Toronto in Canada has partnered with universities in other parts of Africa and the world to set up the database. Dr. Christopher Fomunyoh, Senior Associate for Africa at the Washington-based non-profit National Democratic Institute. Fomunyoh spoke to DW's Mimi Mefo.

DW: Why now, after years of conflict in which thousands have been killed?

Dr Christopher Fomunyoh: This is a very welcome initiative by the University of Toronto in Canada and many other universities, including the University of California Berkeley, the University of Essex, the University of Pretoria in South Africa. The fact that these reknown universities are beginning to pay attention to the crisis in Cameroon and are determined to also document the atrocities that are being committed and to secure evidence of these atrocities, is a wonderful development. I think it shows that this crisis is being internalized and that ultimately those who commit atrocities will be held accountable. The evidence is being gathered now, not just by parties to the conflict, individuals, NGOs or church groups, and human rights groups on the ground, but internationally by academic institutions. It will make sure that impunity doesn't reign, and perpetrators will be called to account.

The UN and other organizations have been documenting the atrocities. What sets this initiative apart?

It is different because it is coming from an academic institution that is highly reputable and highly independent of any other governmental organization. The fact that this university-led initiative will be releasing its information to the world, unlike other organizations that may want to limit access to information they have solely to member states. It will be releasing periodic reports to the world. I think that would shock the conscience of the world and remind its leaders that ultimately, even populations in their own countries will become knowledgeable about the state of these atrocities and this crisis. It will push them to make the appropriate interventions to end this crisis.

What mechanisms will be used to gather accurate information?

The universities have come up with a system that will make it extremely easy for ordinary citizens, eyewitnesses of atrocities - wherever they maybe - just by using their phones to take pictures or videos. They will then upload them very easily to one page that will immediately transfer that information, the time and location electronically to a database that will be managed by the University of Toronto. The advantage there also is that the database is going to be very secure. In this age of cyber criminality, the university will ensure that the data is well stored, sent for verification to databases spread in four different universities across the globe. Pictures will be certified as coming from Cameroon, and the site that the atrocities took place. Credible information can then be used by other international organizations and justice and peace commissions so that action can be taken.

Will this database mount pressure on the international community to take action on Cameroon?

I believe so because, for example, recently, there was a widely published article by a university professor in Calgary, Canada, about the role the country has played in Cameroon so far and the more important role it ought to play to the resolution of the crisis. That article leads to a lot of commentaries, and now that the University of Toronto is creating this database, the Canadian authorities will sit up. I think that would apply similarly to the United States, even to South Africa and to Europe where the partner universities are based. We saw with the anti-Apartheid movement that once you involve universities where people do research and expose atrocities then policy makers are going to be sensitized to the point where they will have to take concrete action - not just words and speeches. After the Rwandan Genocide in 1994, the world said: "never again". It is important that as we move closer to 2020 that collectively we say "never again".

How are you going to protect the sources from being identified?

Protective guarantees are provided to sources, including individuals or organizations that report atrocities and gross human rights violations, as that information can be uploaded onto a web link anonymously. The professionalism of those working in data verification labels adds confidence to this measure.

Dr. Christopher Fomunyoh is Senior Associate for Africa at the Washington-based non-profit National Democratic Institute. This interview was conducted by Mimi Mefo for DW AfricaLink.

Cameroon Separatists Allegedly Abduct Election Candidates
Tagged:
Copyright © 2019 Deutsche Welle. All rights reserved. Distributed by AllAfrica Global Media (allAfrica.com). To contact the copyright holder directly for corrections — or for permission to republish or make other authorized use of this material, click here.