Congo-Kinshasa: ADF Rebels in the DRC - Why Are Locals Protesting Against the UN, Again? 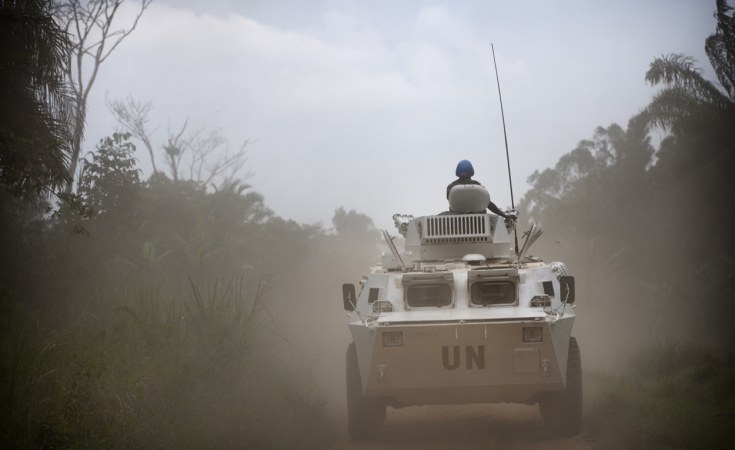 In 2014, attacks attributed to the ADF rebels was followed by local protests against UN peacekeepers. Is history repeating itself?

The spark that set this off was a string of mass killings blamed on the Allied Democratic Forces (ADF) rebel group. The sequence of events that ensued - attacks attributed to ADF followed by retaliation against MONUSCO - was virtually identical to a similar set of incidents five years ago. (At that time, I was the coordinator of the UN Group of Experts on DRC and spent most of my time investigating ADF.)

It began in January 2014 when the Congolese army launched a sustained offensive against ADF, slowly closing in on the rebels' network of camps in the forest northeast of Beni. By April, Congolese troops had seized ADF's headquarters, called Madina, and were chasing the rebels - consisting of hundreds of fighters plus hundreds of women and children - deeper into the bush. In July, deserters and women and children who escaped said ADF was running out of food, ammunition, and able-bodied fighters. By the end of August, at least two hundred people had died of starvation, according to escapees.

In August 2014, however, three pivotal events changed ADF's fortunes and foreshadowed a surge in violence. The first was the group's miraculous salvation from extermination. A woman who escaped ADF told me that Congolese troops had trapped the rebels next to a river. Surrounded and cut off, the few hundred men, women, and children remaining in ADF - down from a thousand or more a few months earlier - believed the final battle was imminent. But then, during the night, word quietly passed to prepare to move. The depleted and starving remnants of the group passed through a gap in the Congolese line. In the following weeks, ADF resupplied and grew strong enough to go on the offensive.

The second event was the appearance of a mysterious man, Mr X. He showed up at a UN base in Butembo, south of Beni, and claimed to be a senior ADF commander. He immediately captured MONUSCO's attention when he said that 25 Taliban-trained Boko Haram jihadists were on their way from Afghanistan to Beni to attack MONUSCO bases. Among a litany of tall tales, he also told gullible peacekeeping analysts that a white German woman was making ADF's bombs.

On 4 September, MONUSCO's force commander issued an order - citing "an imminent and credible threat against MONUSCO" - to increase force protection measures in Beni. This decision, based on the stories of a single fabulist, effectively confined staff to their bases. When MONUSCO troops did start patrolling after attacks began, they stuck to the main roads and were ineffectual at preventing the massacres that continued well into 2015.

The third event was the death of Congolese general Lucien Bahuma, who was in charge of the operation against ADF, on 30 August. The army command soon replaced Bahuma, but the pace of operations slowed and the morale of the troops suffered.

These three events - a miraculous exodus, an intelligence failure, and a change of command - took place on the eve of the start of a series of massacres in the Beni area. In early October 2014, unknown attackers began killing civilians near the town of Oicha, north of Beni. Soon, mass murders spread south to the outskirts of Beni town. The Congolese army and MONUSCO blamed ADF for nearly every one of hundreds of deaths. The UN Group of Experts and later the Congo Research Group said that while some of these killings may have been perpetrated by ADF, others were carried out by Congolese troops and militias active in the Beni area.

On 18 October 2014, locals assembled in front of the MONUSCO base at Boikene in protest at the peacekeeping mission's failure to protect them. A few days later, a crowd of more than 1,000 stormed through the front gate at MONUSCO's Mavivi base, next to the Beni airport. Tanzanian UN troops shot in the dirt, wounding some protesters but discouraging the crowd from venturing further into the base.

Is history now repeating itself in Beni? Yes and no.

There are certainly many similarities. As in 2014, MONUSCO has been passively watching as the Congolese army has waged a unilateral offensive against ADF. A series of massacres has been reflexively blamed on ADF. Local anger has largely (but not exclusively) focused on MONUSCO. And questionable claims that ADF is allied to international terrorists - this time ISIS - have confused rather than clarified ADF's objectives and ways for the army to counter the armed group.

But there are important differences. The Ebola outbreak that started in August 2018 fed local distrust of national authorities and the UN, which has in turn contributed to attacks against health workers. In addition, Congo has a new president, Félix Tshisikedi, who is playing up the (still dubious) ISIS link to get US support including assistance from the US Africa Command.

Still, it feels as if Beni is stuck in a time warp. Bad decisions (another unilateral Congolese army operation with MONUSCO as passive observer) have once again led to bad consequences (the killing of civilians and attacks on MONUSCO).

One way forward may be for the Congolese army and MONUSCO to plan and execute a joint operation as they did in 2013 when they defeated the M23 rebel group. Yet this should address all sources of insecurity in the Beni area - not just ADF - and involve additional efforts to dismantle ADF's regional support networks, which continue to funnel recruits and money to the group. ADF is not as indestructible as it may seem despite its phoenix-like resurgence since 2014, but as long as the rebels remain a useful enemy for other political actors, the rebels and the insecurity they cause are likely to persist.

The events in Beni demonstrate that local distrust of the Congolese government and MONUSCO remain high. Local anger is justified and rational given decades of exploitation and violence at the hands of governments and rebel groups alike, with too little action by the UN to protect civilians. Yet the anti-UN protests - which have their own anthem - may not be as spontaneous as they appear, but rather planned and financed by political operatives who are inflaming the situation.

Ultimately, breaking the cycle of violence requires a grand strategy of conflict transformation that looks beyond simply defeating ADF and the other armed groups in the area. It requires the development of strategies and structures to create sustainable peace.