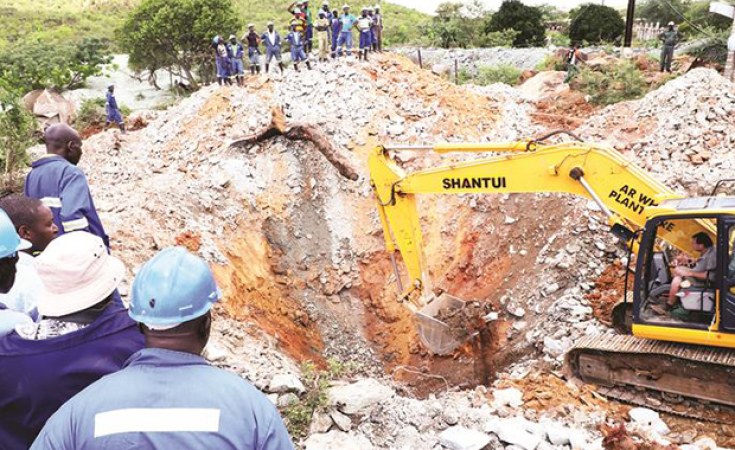 Eliah Saushoma/The Herald
Workers try to rescue four miners who are feared dead at Esikhoveni Mine in Esigodini, Matabeleland South Province, on December 11, 2019.
The Herald (Harare)

FOUR miners at Esikhoveni Mine in Esigodini, Matabeleland South Province, are feared dead after a movable cabin they were working in collapsed and fell into a 62-metre mine shaft on Monday morning.

The incident occurred at around 7.30am and efforts are underway to rescue the quartet named as Andrea Malunga (79), Ashton Shiwilimba (86), Dumisani Sibanda (43) and Tapiwa Moyo (41).

National police spokesperson Assistant Commissioner Paul Nyathi said police were working with stakeholders to rescue the four, but there was no geological map of the mine, he said.

The mine is owned by Mr Jan Blighnut and it is an old mine that was run by Germans years ago.

"Police are still conducting investigations to ascertain what transpired and we are working together with relevant stakeholders," he said.

In an interview with ZTN, the mine manager, Mr Vessel Mpofu said the four were working inside a shed that was unknowingly established on a disused mine shaft when the structure suddenly collapsed around 7.30am.

"We then informed the police and the Ministry of Mines officials. They came here and we began the search. The search continued until 8pm last night (on Monday night) and we resumed this morning at 7.30am.

"We are, however, experiencing challenges in our rescue efforts," he said.

He said this is the first time the mine has experienced a major incident since operations commenced in 2002.

Meanwhile, the Civil Protection Department (CPD) has also roped in How Mine's rescue team and the Ministry of Mines and Mining Development to assist.

Acting Umzingwane CPD chairperson, Siphathisiwe Mlotshwa said the arrival of an excavator will see the start of the rescue mission, despite persistent rains. Workers at Esikhoveni Mine were due to close for the festive holidays yesterday.

Deadly Accidents Put Illegal Mining Under Spotlight in Zimbabwe
Tagged:
Copyright © 2019 The Herald. All rights reserved. Distributed by AllAfrica Global Media (allAfrica.com). To contact the copyright holder directly for corrections — or for permission to republish or make other authorized use of this material, click here.