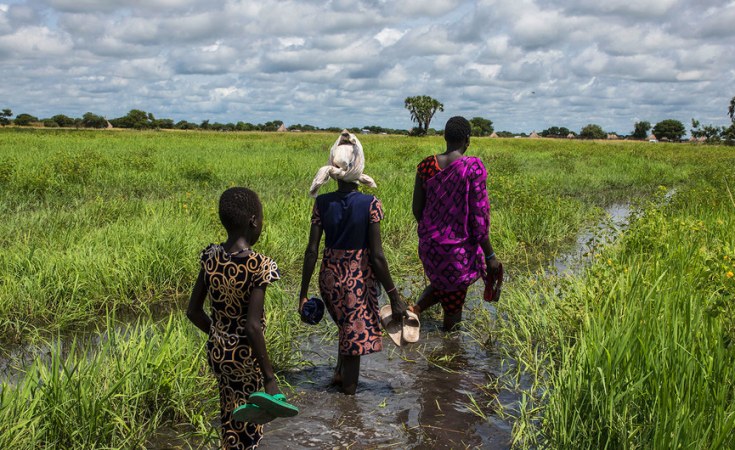 Gabriela Vivacqua/WFP
A woman and her family wade through a flooded plain to reach their home in Thaker, Unity state, South Sudan.
UN News Service

The World Food Programme (WFP) is warning against potential famine in South Sudan as hunger deepens due to drought, floods and an uncertain political future.

WFP fears more than 5.5 million people could be going hungry in early 2020, and the UN agency on Thursday reported that it is in "a race against time" to secure vital funds to feed them.

"South Sudan is in trouble, serious trouble. Not just because of the conflict but because of the rains and the flooding that has hit in the last few months. It is much worse than we had anticipated", said WFP Executive Director David Beasley.

South Sudan, the world's youngest nation, has been plagued by conflict for most of its eight years of existence.

The country was hit by drought earlier this year, which was then followed by catastrophic floods, prompting the Government to declare a state of emergency in three regions in October.

The floods have affected nearly one million people and destroyed 73,000 metric tons of potential harvests.

Thousands of cattle and goats have also been wiped out, threatening the livelihoods of those who depend on these animals for their survival.

Two years ago, South Sudan experienced a famine which was defeated by a large-scale humanitarian response.

However, WFP said experts now say the food security outlook has never been so dire.

WFP needs the $100 million to buy and pre-position food stocks ahead of the rainy season in May and will need $270 million for the first half of 2020.

This year, the UN agency stepped up its assistance in South Sudan to reach some 4.6 million people.

"With all the catastrophes around the world, the last thing we need is another", said Mr. Beasley.

"We know the problems that we've been having in South Sudan, but the rains and the floods have led to a national disaster and are much worse than anyone could have anticipated."

Humanitarian appeal and hopes for peace

Meanwhile, the humanitarian community in South Sudan has launched a $1.5 billion appeal to provide 5.6 million people with life-saving assistance in 2020.

Needs remain high despite a period of relative stability following the signing of a revitalized peace deal between the President and his main political rival last year, said the top aid official in the country.

Alain Noudéhou, the UN Humanitarian Coordinator in South Sudan, reported that overall, more than seven million citizens require support or protection, while nearly four million are displaced inside or outside the country.

"The people of South Sudan are impatient for peace," he said. "The coming year offers great hope that the country's leaders will begin the long road to recovery from conflict."