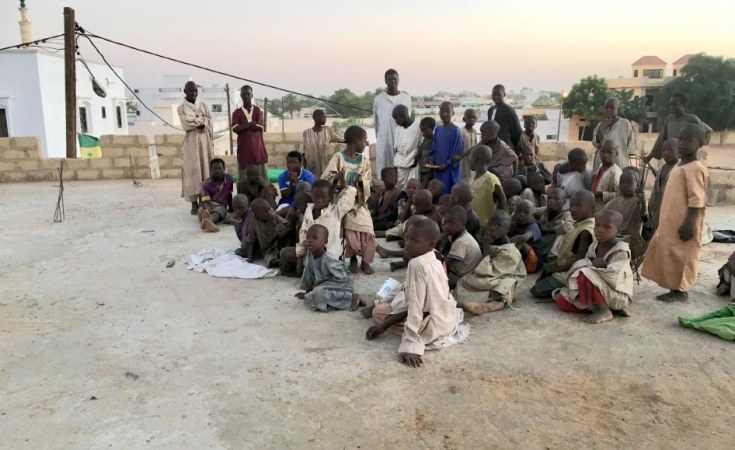 Dakar — The Senegalese government has not gone far enough to combat the chronic and widespread abuse, exploitation, and neglect of thousands of talibé children living in traditional Quranic schools, Human Rights Watch and the Platform for the Promotion and Protection of Human Rights (PPDH), a Senegalese coalition of rights groups, said in a report released today.

The 84-page report, "'These Children Don't Belong in the Streets': A Roadmap for Ending Abuse, Exploitation of Talibés in Senegal," analyzes the Senegalese government's policy, programming, and judicial efforts from 2017 to 2019 to address the abuses. The groups found that these efforts have been insufficient and set out a roadmap to end forced begging and abusive conditions in the Quranic schools, known as daaras.

"Talibé children have been openly and tragically neglected, exploited, and abused, and the government simply has not done enough to stop it," said Corinne Dufka, associate Africa director at Human Rights Watch. "The government needs to take bold, concrete, and sustained actions to end the suffering many children endure in Senegal's daaras."

During research in 2018 and 2019, Human Rights Watch and PPDH traveled to four regions of Senegal, visited 22 daaras and 13 children's shelters, and interviewed over 150 people including talibé children, Quranic teachers, social workers, child protection experts, police and judicial personnel, government and UN officials, and others.

Photos circulated on social media in November of several talibé children in chains in Louga region highlighted the urgency of government action to end the abuse, the groups said. The photos prompted both widespread condemnation by children's rights activists and vehement protests from religious leaders against the arrest and prosecution of the children's Quranic teacher. "This is but the latest of many cases of inhuman treatment of talibé children in recent years," said Mamadou Wane, president of PPDH. "The state needs to fulfill its responsibility to protect these children, regulate daaras and end these unconscionable abuses."

While religious figures in Senegal still wield a strong influence, the swift outcry over the photos underscores that the shifting tide of public opinion has begun to demand accountability - both from Quranic teachers and the government.

The proposed roadmap for the government to better protect talibé children sets out five key steps: scaling up programs to fight child begging; balancing regulation of and support for daaras; expanding under-resourced child protection services; cracking down on child trafficking by Quranic teachers; and prioritizing justice for all abuses against talibé children.

Human Rights Watch has documented serious and recurring abuses against talibé children in Senegal for over a decade. At present, more than 100,000 children in the country are forced by Quranic teachers, also known as marabouts, to beg daily for money or food. In contrast to other Quranic teachers who ensure the well-being of children in their care, abusive marabouts set daily begging quotas enforced by beatings. Many also mete out harsh punishments to children who try to run away or refuse to study, including chaining them or withholding food. Each year, hundreds of talibé children fleeing this abuse end up in the streets.

The roadmap builds on a report released in June that documented scores of abuses by Quranic teachers or their assistants in 2017 and 2018, including the deaths of 16 talibé children due to abuse, neglect, or endangerment.

The past decade has revealed a slow but positive national trend toward enforcement of domestic laws - such as those banning the abuse and willful neglect of children, wrongful imprisonment, endangerment, and human trafficking (including exploitation of begging) - in cases involving Quranic teachers, once considered untouchable due to their powerful social influence.

At least 29 Quranic teachers or their assistants were prosecuted for abuses against children between 2017 and 2019, resulting in at least 25 convictions, including 8 for human trafficking. However, the total remained small in proportion to the widespread nature of the abuses.

Human Rights Watch and PPDH analyzed several barriers to justice, including social workers and police who fail to report, investigate, or refer cases; family members who choose not to press charges; children's limited access to legal aid; and public pressure on the judiciary to drop or reduce charges or sentences, linked to the social influence of Quranic teachers.

The groups also analyzed a cornerstone government program to address forced child begging by "removing children from the streets" and returning them to their hometowns and villages. They concluded that the program, carried out only in Dakar, failed to achieve any widespread or durable impact due to its limited scope and failure to ensure investigations and prosecutions of the Quranic teachers who had forced the children to beg.

Other government efforts to help talibé children - including providing social assistance to some daaras and talibés, setting up several "modern daaras," and combatting human trafficking - remained limited in scale and suffered from inconsistencies and delays.

The groups identified several promising efforts at the local level by mayors and health inspection services in Dakar and Saint-Louis to regulate daaras. However, a bill to establish national standards for daaras, first drafted in 2013, has not been voted into law.

The groups also documented the critical lack of resources for child protection services such as social workers, children's shelters, and child protection committees - all of whom are responsible for handling hundreds of cases of talibé runaways and abuse victims each year. Government social workers in Tambacounda, Diourbel, and Louga regions bemoaned the lack of emergency children's shelters, noting that they were obliged to shelter children overnight in offices, orphanages, or other daaras.

To address the many issues preventing talibé children from accessing their fundamental rights to education, health care, and protection from abuse, neglect, and exploitation, the Senegalese government needs to commit to a comprehensive and multifaced strategy, Human Rights Watch and PPDH said. The groups urged the government to carry out the proposed roadmap and pursue an approach that balances deterrence, social assistance, and public communication.

"The abuses going on in many daaras are out of control, yet the government delays taking action," said Issa Kouyate, member of PPDH and director of the children's center Maison de la Gare in Saint-Louis. "Talibés have suffered enough. It's high time for change."

Tagged:
Copyright © 2019 Human Rights Watch. All rights reserved. Distributed by AllAfrica Global Media (allAfrica.com). To contact the copyright holder directly for corrections — or for permission to republish or make other authorized use of this material, click here.