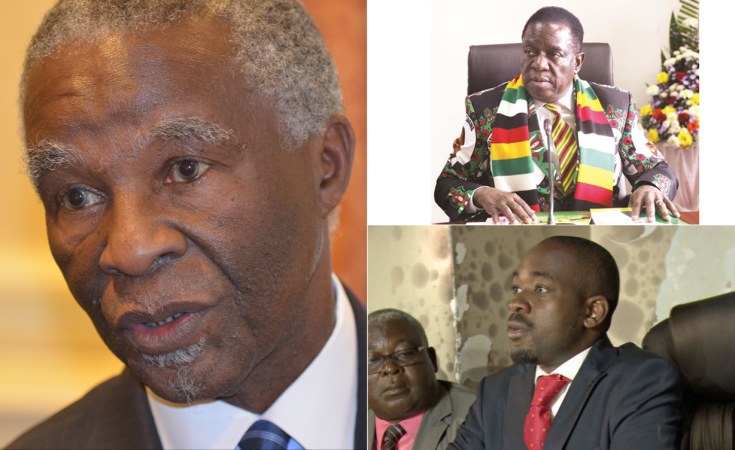 This is the thinking of Chamisa after meeting with Mbeki in Harare Monday evening.

Writing on his micro-blog Twitter after the meeting, Chamisa said he expects that the dialogue between him and his rival would deliver change and bring real reforms.

"We want dialogue that is meaningful, where the political will to change for the benefit of Zimbabweans outweighs political expediency. Dialogue must deliver true change and real reforms.When we shake hands let us be agreeing to truly walk in the same direction, a new direction," he wrote.

He added that he stood firm that the people of Zimbabwe could bring political change in the country through dialogue.

"Democracy can't exist without a true commitment to happiness, freedom and peace. Our political impasse cannot continue.We stand firm on the principle that none but ourselves can bring about the true change we need. Real issues affecting us all must be at the heart of any dialogue," Chamisa wrote.

He said he was ready to shake Mnangagwa's hands to end the political impasse over the disputed July 2018 presidential election.

Chamisa has since then refused to recognise Mnangagwa's win.

Before, meeting Chamisa on Monday, Mbeki had a close door meeting with Mnangagwa at State State House also in Harare.

After the meeting with Mnangagwa, Mbeki said he his bid was to see Zimbabwe restored to order.

"We all have a responsibility to help one another to the extent that we can do anything we can do to assist brethren, the Government and the country," he said.

Mbeki was a broker to Zimbabwe's 2009-13 unity government and his meetings with Mnangagwa and Chamisa this week have renewed interest to find a lasting solution to Zimbabwe's mounting, political, social and economic problems.