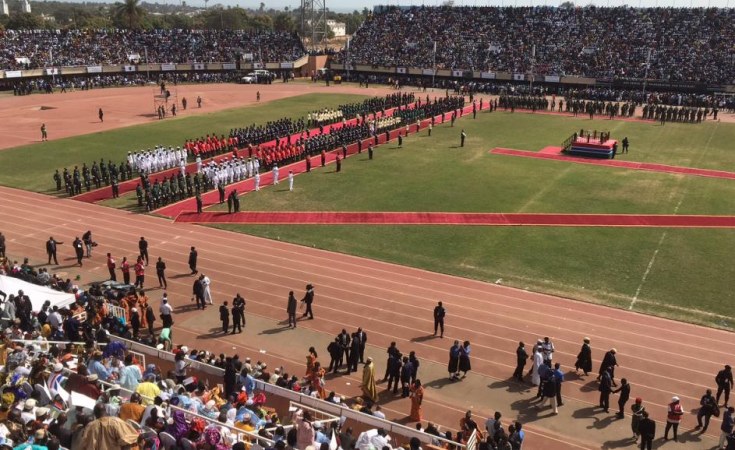 Ebriama Sakareh, the government spokesperson has on 16th December, received a petition paper from Operation Years Jotna, that urges President Barrow to honour the signed Coalition Agreement and step down.

These remarks were made by the movement spokesperson, Hagi Suwareh, after he handed-over the paper to the official for the President.

According to Suwareh due to the huge crowd of the protesters, he suggested to the govt spokesperson for them go to go with him at safer place, which he added, Sankareh agreed.

"We selected five people in the movement, including myself to meet the spokesperson," he said. "He thanked us and immediately left for Banjul after receiving the paper," he added.

He continued, "We did not hand over the petition for him (spokesperson) to read, but to deliver it to the President and he (the President) has the responsibility to make sure he replies to the group."

The movement spokesperson added that if President Barrow fails to reply, they will hold another protest that will take days before the protest will end.

He quickly shrugged off allegations that the movement was backed by a political party, adding that the group is an independent-movement.

"If we are backed by a political party, you could have seen T-shirts and banners of that party but that is not true," he said.

He added, "The group is an independent movement, which is seeking support from the entire electorate because we all voted and we didn't vote for 10 candidates."

He said, "We only vote for one candidate, these are electorate trying to hold their leaders accountable based on promoting their integrity."

In conclusion, he said their peaceful protest does not mean they will stop fighting for their rights, and they will do whatever necessary for them to win.

At 11:17am, thousands of anti-government protesters walked all the way from Sting Corner to some 200 metres away before the Denton Bridge to delivery their paper.

Protesters were having banners with slogans: "An Agreement is an Agreement, Respect the Coalition MoU." While others say, "No to self-Perpetuation. Gambians Voted For 3 Years Transition"

At 1pm, the movement members quickly started to display they expressed their dissatisfaction that the President sent a junior official to receive their petition while they were looking forward to a minister to do that.

The security forces who were deployed in the street were unarmed personnel at The Gambia Police Force and secret agents. As usually, at Denton-Bridge checkpoint, armed soldiers were seen at the foot of the bridge.

By 2pm, all the protesters headed back towards Westfield to go to their respective homes, this was immediately after seeing the government spokesperson.

No casualties or arrests were reported, as the movement peacefully protested and it was a large crowd. The security personnel handled the crowd maturely and amicably.

No ECOMIG forces were visible and vehicles were plying the road as usual.

Previous Story
The 'Three Years Jotna' Procession
Next Story
What Would Happen If Barrow Were to Resign Now?

What Would Happen If Barrow Were to Resign Now?