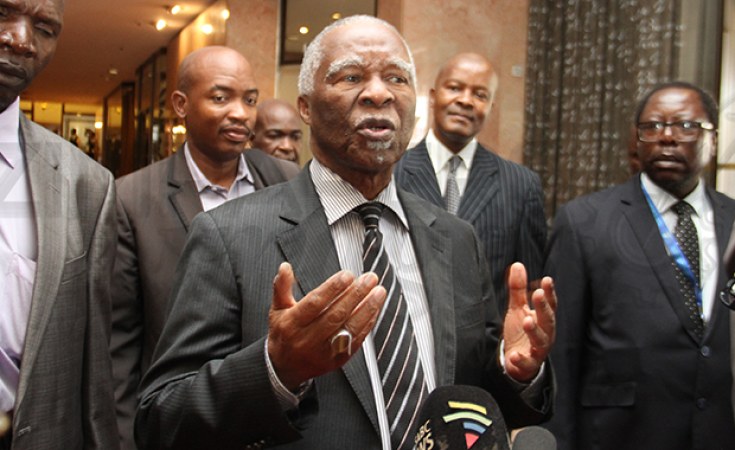 THE visit to Zimbabwe by former South African president and revered African statesman, Cde Thabo Mbeki, is welcome and gives Zimbabwe's political actors an opportunity to reflect soberly on the negative role they have played in keeping the country polarised.

He has inclined a listening ear to all the political players and even went the extra mile by meeting other influential lead-ers outside politics.

Cde Mbeki is doing this at the invitation of President Mnangagwa, who has repeatedly declared that he is open for dia-logue with all political leaders in the country.

This has generally gone on very well, except for MDC-Alliance leaders who have sought to project themselves as special and above everyone else.

They have been making unreasonable demands for no valid reason.

When people take entrenched positions, they become blind to the fact that some of those positions are not sustainable.

The position taken by MDC-Alliance leader Mr Nelson Chamisa of disputing the 2018 Presidential election results in which he lost to President Mnangagwa is extreme and untenable.

He desperately needs to climb down and face the truth that the 2018 elections are history.

Once elections are held according to the laws of the country and results announced, the expectation is that the loser ac-cepts defeat with humility and the winner magnanimously assumes his or her position of authority.

If there are disputes, they are resolved by the courts in keeping with the laws of the country.

This is what happened when the highest court in the land, the Constitutional Court (Concourt), dismissed Mr Cham-isa's election challenge and upheld President Mnangagwa's victory.

The expectation was that Mr Chamisa would accept the verdict and wait for his second chance in 2023.

This has not happened.

For more than a year, Mr Chamisa has failed to convince any logical-thinking person that he won the elections as he claims.

The entire Southern African region and the African continent have failed to understand his claim.

Elections in the Sadc region are held in accordance with agreed protocols and the region sends observers to ensure that what the peers have agreed on is followed.

This was done and the region pronounced itself clearly.

To show their confidence in what happened in Zimbabwe, President Mnangagwa duly assumed the chairmanship of the Organ on Politics, Defence and Security Cooperation recently.

Whatever assignment Mr Mbeki has on Zimbabwe, it will be done within the framework of Sadc and with the support of the entire region.

Sadc Executive Secretary Dr Stergomena Lawrence Tax has called on Sadc citizens, including Zimbabweans, to give space to what Mr Mbeki is doing.

It is, therefore, political naivety for Mr Chamisa to continue to take a position that challenges President Mnangagwa's legitimacy and hope to sustain it.

It will have no takers, except in Western capitals, where it is seen as an opportunity to further a neo-colonial agenda.

We were, therefore, not surprised to hear former president Mbeki state unequivocally: "Well, normally, I would say we must all of us respect the view of the people. If people have queries, they must go to the courts because all the countries in the region have that provision that people can go and lodge their complaints about elections to the Judiciary. And once the courts have made a ruling, then we have to accept that. So, it's generally the approach."

We are sure that the message had a familiar ring to Mr Chamisa's ears.

This is what all well-meaning African and local leaders have been telling him.

We are also sure Cde Mbeki explained this to the MDC-Alliance leader.

Cde Mbeki's visit gives Mr Chamisa an opportunity to swallow his pride and join the other political leaders in the Po-litical Actors' Dialogue (POLAD).

It is our understanding that, within POLAD, all political actors are free to talk to each other, even in the absence of oth-ers.

Should Mr Chamisa have specific issues to raise with President Mnangagwa, he can raise them within that framework, including seeking personal audience.

He just needs to take off the "special one" jacket and show respect to other political leaders -- big and small.

Most of the issues that Mr Chamisa raises such as electoral reforms, the state of the economy, corruption and the gen-eral welfare of the people are already under discussion within POLAD.

He must also be prepared to pronounce himself on the issue of economic sanctions imposed by the United States (US) and the European Union (EU) on Zimbabwe and justify to his peers why he supports them to the detriment of the people of this country.

All political players must act in the national interest and put the country and the people first.

Whatever differences the leaders might have, must not be put above the national interest.

The rebuilding of the economy needs the participation of everyone.

We reject the attempts in some quarters to cast aspersions on the integrity of Cde Mbeki and to suggest that he is a par-tial mediator.

He has helped many leaders find each other in times of difficulties throughout the African continent and beyond, and is respected for that.

His efforts, noble as they are, should not stop conversations that have been going on in the POLAD framework and through other local organisations such as churches.

In this season, when we commemorate the historic Unity Accord between Zanu and Zapu, may our leaders draw inspiration from that accord to also work towards unity, which is the path to peace and prosperity.

Chamisa in Bulawayo to Update Structures On Mbeki Talks

Next Story
Tagged:
Copyright © 2019 The Herald. All rights reserved. Distributed by AllAfrica Global Media (allAfrica.com). To contact the copyright holder directly for corrections — or for permission to republish or make other authorized use of this material, click here.