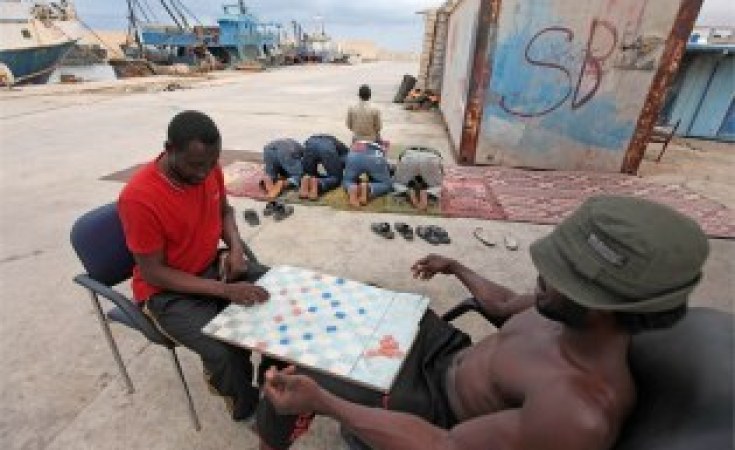 Photo: Jeremy Relph/IRIN
Sub-Saharan migrants in Libya, Fearful of arrest and lacking the means to leave the country, people find ways to while away the time
Voice of America (Washington, DC)

A year after the United Nation’s General Assembly adopted the Global Refugee Compact to deal with the world refugees crisis, world leaders gathered in Geneva to weigh the progress made, and pledged more than $3 billion to support refugees and about 50,000 resettlement communities.

U.N. High Commissioner for Refugees Filippo Grandi said the Global Forum on Refugees divvied up the responsibility for dealing with the 25.9 million refugees who have fled war and persecution, mainly exiled in poor neighboring countries.

In addition to the $3 billion, Grandi said Germany, which has hosted hundreds of thousands of Syrian refugees, pledged about $1.9 billion. The Inter-American Development Bank pledged $1 billion to communities hosting refugees in Latin America. The World Bank also increased its funding for projects supporting refugees by 10%, to $2.2 billion.

At the end of 2018, nearly 71 million people were living in forced displacement due to war, violence and persecution, including the nearly 26 million who had fled to other countries as refugees.

The meeting this week in Geneva stressed the need to share the economic and societal burden of nearly 80% of the world’s refugees living in poor and developing countries.

"We cannot go into a world in which responsibility-sharing means some states keep all the refugees and some states pay all the money. We cannot do that, that is why we have resettlement, why we have different types of partnerships," Grandi said Wednesday at the close of the two-day meeting.

The number of people fleeing their homeland has been surging. According to a new report by the U.N.’s International Organization for Migration (IOM), the number of global migrants has increased from 150 million, to 272 million, in the past 20 years.

Contributing to these burgeoning numbers are the reasons why large numbers of people are being forced out of their homes, Andrew Selee, president of the Migration Policy Institute, said.

"People are being forced out for reasons — whether it's gangs, whether it's civil war, whether it’s a state collapse, whether it's environmental degradation — things that a normal person would decide to flee from," Selee said.

Along with the challenge of dealing with accommodating large amounts of refugees is the issue of who to let in. Countries are facing the question of who is a refugee and who isn't. Some cases are clear cut, such as Turkey with the Syrians who are fleeing a brutal civil war; or Colombia with the Venezuelans fleeing their country’s revolution and subsequent economic meltdown.

But there are other cases, such as in Europe and the United States at the southern border with Mexico, in which they are trying to figure out who should be returned to their home country, and who actually has a legitimate claim for asylum or refugee protection.

"And, so some people say, OK, we'll call all these people refugees. Then people say, let's not expand the definition but at least accept that these people are forced migrants that aren't leaving by choice," Selee said. "They're leaving because something has pushed them out. And there's a recognition that we need to offer some protection to those people, whether or not we call them refugees."