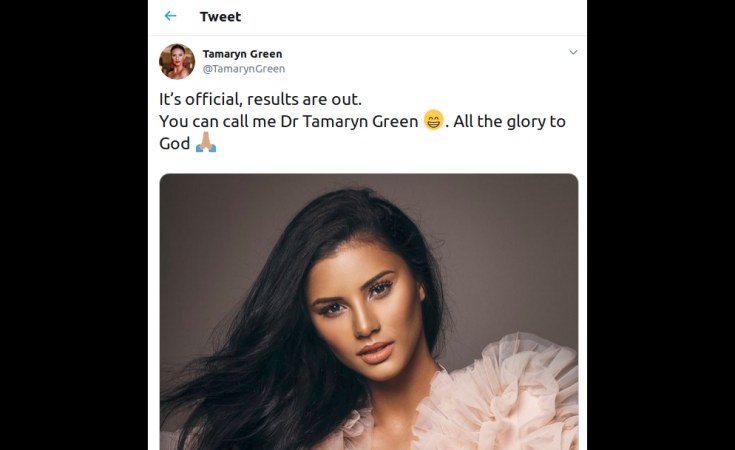 When former Miss South Africa Tamaryn Green was diagnosed with tuberculosis (TB) in the middle of her second year at the University of Cape Town (UCT), the MBChB student had never felt more afraid and alone.

Reflecting on her journey after the diagnosis, she remembers having only one thought: don't tell anyone. And for a while she didn't. But as time passed, she realised that keeping mum about contracting TB was a big mistake.

Tamaryn realised that she could use her diagnosis to educate young South Africans on the potentially fatal disease and help break the stigma attached to TB, especially among the youth. Through education she could make a difference in the lives of many.

As a medical doctor in waiting, it was her duty. And she managed to do just that.

"My journey has been challenging yet fulfilling. I won't trade a second of it."

Following a seven-year reign as a medical student in UCT's Faculty of Health Sciences, which includes the full year Tamaryn took a leave of absence to concentrate on her Miss SA duties, she will finally graduate with her MBChB on Monday, 23 December.

And what a ride it's been, one with mostly highs, but as with everything in life, there were a few lows too.

"My journey has been challenging yet fulfilling. I won't trade a second of it," Tamaryn said.

It was in 2015 when Tamaryn noticed a lymph node was swelling in her neck. She visited her doctor immediately. Because she had no obvious TB symptoms like coughing, night sweats or weight loss, the doctor performed an incisional biopsy. She was then referred to a pulmonary specialist who delivered the earth-shattering news: she had contracted pulmonary TB.

Pulmonary TB is associated with tuberculosis lymphadenitis, which is a TB infection of the lymph nodes in the neck. Since she wasn't coughing, doctors prescribed medication and agreed that she could return to campus.

"Being diagnosed with TB was one of the most challenging times in my life."

After two months, the lymph node had grown to the size of a golf ball. During one of her classes, the pain became so unbearable that Tamaryn approached the Department of Obstetrics and Gynaecology's Dr Chivaugn Gordon to have a look at it.

In no time Gordon contacted pulmonologist Dr Greg Calligaro who found a build-up of pus in the surgery wound caused by a secondary infection. To treat it, Tamaryn visited Groote Schuur Hospital daily to have the wound drained. It was a strenuous few months, but in December that year, she was cured.

"Being diagnosed with TB was one of the most challenging times in my life. But I received amazing support from my parents, siblings, a few faculty members who really helped me to overcome this," she said.

But opening up about contracting the disease proved to be healing in itself.

In 2018 after she was crowned Miss SA, her role required her to decide on a campaign for her reign. By then, it had been three years since she was diagnosed and cured of TB, and she toyed with the idea of dedicating her reign to her fight against the disease.

She knew that the message she wanted to spread about the effects of TB would be powerful and relevant to fellow South Africans. However, she was unsure of how people would react. After discussing her idea with a Miss SA organiser, and receiving full support, she pitched the idea to the pageant board.

As they say, the rest is history.

"Opening up about [TB] felt like a weight being lifted off my shoulders."

The Miss SA platform was also the perfect fit for her #BreakTheStigmaCampaign.

"Wanting to deal with my illness by myself was emotionally and mentally taxing. Opening up about it felt like a weight being lifted off my shoulders," she said.

Tamaryn received an outpouring of support from TB survivors and became a World Health Organisation and National Department of Health ambassador. In September 2018 she addressed the United Nations' first-ever high-level panel on TB.

"This experience has taught me never to be afraid to open up about challenges or adversity - and to ask for help," she said.

The 25-year-old said she is excited to receive her medical degree and to start making a difference in the lives of people who need it most.

And while she admitted that medicine was not her first career choice, she said she is right where she is meant to be.

"I made the decision to study medicine because my father always wanted to be a doctor but couldn't. The apartheid era brought many challenges that prevented him from pursuing the career," she said.

"I am blessed that once I started studying medicine, I realised that I really have a love for it. I'd love to make a difference in people's lives by helping and healing."