Nigeria: There Is No Going Back On N30,000 Minimum Wage, Governors

Thirty-six State Governors under the aegis of the Nigeria Governors' Forum, NGF, have said that there was no backtracking on the decision of the Federal government with regard to the Minimum wage of N30,000 to workers.

According to the governors, they have already subscribed to paying the wage, but the consequential impact on the upper cadre must be renegotiated.

Speaking with Journalists in Abuja Wednesday night after the meeting that entered into the early hours of yesterday, Chairman of the Forum and Ekiti State governor, Dr. Kayode Fayemi who noted that all fingers are not equal, said that while some states can even afford to pay N50,000, governors have been engaging with the respective branches of the Nigerian Labour Congress, NLC to meet up with the December 31 minimum wage implementation deadline.

According to him, the NLC was aware of the level of preparedness of states to pay, adding the governors were willing to make available to the union each state's status of negotiation to clear any doubt.

Fayemi who responding to a question on whether the governors had backtracked on negotiations said: "Minimum wage was not on our agenda because it is a settled matter and governors have all indicated without any equivocation that we subscribed to the Act of parliament that has been passed on the national minimum wage of N30,000. There is no debate we have accepted that.

"The negotiation thing you are talking is about the consequential impact of the minimum wage on the higher level. Each state has started that process, if the Nigeria Labour Congress is not fully aware of the status of the negotiation in the various states, we will be happy to share the information available to us with them. But as far as we are concern, there is no decision from the Governors Forum to backtrack, we are not backtracking on the minimum wage. However, fingers are not equal, states have to renegotiate in terms of the consequential implication for the others. Some states maybe in the position to pay N50,000, what we can tell you is that no state will pay less than N30,000 when we finally get to that point."

Responding to the position of governors on federal government's plans to borrow $30 billion, Fayemi explained that the governors would not want to come between the federal government and the National Assembly as the borrowing plan had nothing to do with them.

Recall that the federal government and labour on October 18 announced an agreement on the implementation of the new wage.

Also, recall that the Federal Executive Council (FEC) at its meeting in October presided over by Vice President Yemi Osinbajo approved the agreement and set dates for the take-off of the new wage and payment of the arrears.

FEC also directed that the payment of the new salary structure should take effect from April 18 and the arrears cleared by December 31.

The NGF in October had said the agreement between the federal government and organised labour on consequential adjustments on the new minimum wage was not binding on state governments.

The agreement over consequential adjustments averted a strike that labour had threatened to call had the government further delayed the take-off of the new minimum wage.

Earlier, Fayemi while reading a Communique at the end of the meeting said, "We, members of the Nigeria Governors' Forum (NGF), at our meeting held today at the NGF Secretariat Abuja, deliberated on several issues and resolved as follows:

"The Forum received an update from the Auditor General of the Federation (AuGF) and the World Bank team on the State Transparency, Accountability and Sustainability (SFTAS) on the Independent Verification Assessment (IVA) exercise conducted across states.

"The Independent Verification Assessment (IVA) team highlighted among others, activities of the FY2018 Annual Appraisal Assessment to be concluded in January 2020 while the transfer of 2018 grants to States will take place in March 2020.

"As SFTAS implementing partner, the Nigeria Governors' Forum Secretariat will carry out regional sensitization workshops in March 2020 and kick start the provision of technical assistance to States through customized just-in,-time advisory and training, exchange visits and peer learning events.

"The Forum received an update on the health priorities of the Forum especially Universal Healthcare, Nutrition and on the Polio Eradication Initiative, including the Seattle Declaration. Governors reiterated their commitment to effective implementation and tracking of the Seattle commitment.

"The Forum received a briefing on the UK-Africa Investment Summit 2020 from the UK Foreign Office led by Mrs Harriet Thompson, the UK Deputy High Commissioner to Nigeria. The summit will be hosted by the UK Prime Minister and will bring together businesses, governments and international institutions to showcase investment opportunities in Africa in January 2020.

"Members expressed optimism for deeper opportunities in various sectors of the economy including agriculture, infrastructure, manufacturing, health, education and financial services; and committed to strengthening the Forum's partnership with the UK's CDC Group and the Private Infrastructure Development Group (PIDG) to help bridge relations between Nigerian and UK companies.

"The Forum received a delegation of the Conference of Speakers of the State House of Assembly and had fruitful discussions, on some constitutional matters.

"The Forum received a presentation from the Ministry of Finance, Budget and National Planning, on the Geo-Referenced Infrastructure and Demographic Data for Development (GRID3) programme in Nigeria - a programme designed to strengthen the application of geospatial data for evidence-based decision making in the county. The National Coordinator of GRID3, Inuwa Yau, also highlighted several applications of the programme in priority areas of government including food security, health coverage, financial inclusion, survey and demographics and education.

"Finally, State governors commended the Ministry of Finance, Budget and National Flaming for coordinating the GRID3 programme which will be central to development-planning going forward. Members pledged to work with the Ministry, by providing the right institutional arrangements in all States to ensure that each State supports the generation and management of geospatial data. This will ensure that State governments have the right information in identifying where people live and how critical services can be most equitably and effectively allocated." 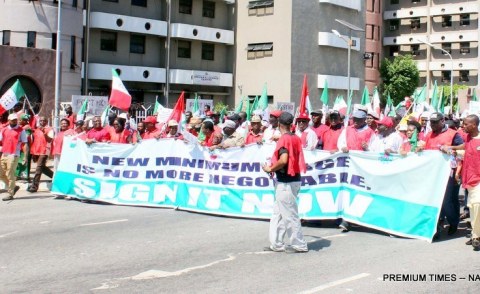 Tick, Tock - Time Runs Out for Nigerian Governors on Minimum Wage
Tagged:
Copyright © 2019 Vanguard. All rights reserved. Distributed by AllAfrica Global Media (allAfrica.com). To contact the copyright holder directly for corrections — or for permission to republish or make other authorized use of this material, click here.