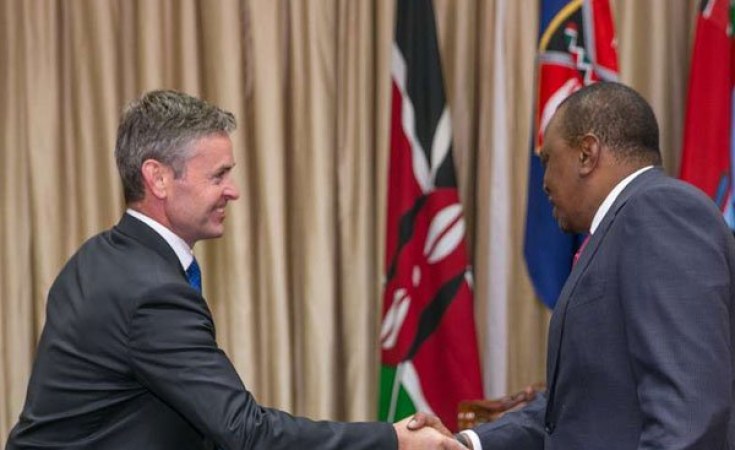 PSCU/The Nation
President Uhuru Kenyatta greets Paul McDade, Tullow Oil's then CEO, ahead of a meeting at State House in Nairobi on August 24, 2016.
The East African (Nairobi)
By Edwin Okoth

British exploration firm Tullow Oil has stated that it has the financial muscle required to develop petroleum reserves in Uganda and Kenya, even after the sudden exit of its chief executive triggered a collapse of its share price.

Tullow, which is in advanced stages of developing oilfields in the two countries, now says that it has 'reset' its operations to ensure that production schedules remain on course.

"A review of the production performance issues in 2019 and its implications for the longer-term outlook of the fields has been undertaken and has shown that the Group needs to reset its forward-looking guidance," said the Tullow Kenya managing director Martin Mbogo in a response to The EastAfrican.

"The Board has committed to undertake a thorough reassessment of the Group's cost base and future investment plans in order to allocate appropriate capital to the Group's core production assets, development projects and continued exploration.

The Board believes that this reassessment and the resultant actions will reset the business and deliver value to shareholders."

Tullow lost half of its market value after its shares took a nosedive on December 9 following a surprise exit of its chief executive officer Paul McDade, and exploration director Angus McCoss.

The two had been at the company for over a decade.

The firm, however, insists that its investment plans in Kenya and Uganda will not be affected by the difficulties that it is going through, giving hope to the East African states whose prospects for petrodollars largely hang on the fate of the UK company.

Mr Mbogo says Tullow still has enough cash to finance its operations, insisting that the dip in share value will not dent its ability to raise funding for future projects.

"We do not see the change having an impact on Uganda and Kenya Projects. Our focus remains to deliver an FID (final investment decision) in Kenya in late 2020 while in Uganda, our focus remains to progress the project and together with our Uganda Joint Venture partners, we are engaging the government with a view to finding an amicable solution to pending issues that have delayed FID," Mr Mbogo told The EastAfrican.

Tullow has reviewed its production performance in 2019 to prepare a longer-term outlook.

Part of the business 'reset' will involve an assessment of its investment pipeline to inform where its capital will be allocated in what may signify less aggression towards new ventures starting next year.

Mr Mbogo said the exits, which were preceded by year-long production hitches in the company's main producing assets, the TEN and Jubilee fields in Ghana, as well as operational delays in Kenya and Uganda, were not tied to Tullow's failed sale of part of its stake in the Uganda operation that hit a snag over a tax dispute.

"As earlier announced, the executives' exit was due to the Board's disappointment with the performance of Tullow's business. A review of the production performance issues in 2019 and its implications for the longer-term outlook of the fields has been undertaken and has shown that the Group needs to reset its forward-looking guidance," he said without giving further details on the planned reset of the business.

The group now forecasts its output next year at 70,000 to 80,000 barrels a day, down from 87,000 barrels a day in 2019. Analysts attributed the reduced production forecast to the negative impact on the valuation of its key assets and the sharp share plunge.

The company had reduced its 2019 production forecast more than once as the Ghana oilfields continued to experience a range of challenges.

The surprise exit of its executives, the board's decision to suspend dividend payout and revision of production guidance had cast a dark shadow over the company's outlook and raised concerns that ongoing efforts toward full field development in Kenya could stall.

In Kenya, Tullow is in a joint venture partnership with Africa oil and Total to develop commercially viable crude oil deposits in the country's northern districts of Turkana.

Kenya's Ministry for Petroleum remained upbeat over objective to become an oil exporting nation by 2024, backing Tullow's position that its current setback will not deter the plans.

"We look at Tullow as part of the joint venture. Remember there is Total and Africa Oil in there so we are not worried with what is happening at Tullow for now. Our plans remain on course and we will be working on the steps lined up as we advance towards full field development and the building of the pipeline," Kenya's Petroleum Principal Secretary Andrew Kamau told The EastAfrican.

In June, Tullow revealed to the Kenyan parliament that it will spend some $5 billion by 2022 when the first phase of Full Field Development is projected to be complete. The firm said that the amount would cater for exploration, appraisal and full-field development between 2010 and 2022, with about $2 billion already spent.

The firm will also need to summon more financial resources as Kenya prepares to build the heated crude oil pipeline to be used in transporting the waxy oil to Lamu Port for storage and subsequent export. The British explorer will co-own a 25 per cent stake in the multibillion-dollar project that will see partners seek financing to cover its portion of funding.

Analysts will be watching keenly as the firm releases its full-year financial and operational updates on February 12.

An operational review through the Group's Trading Statement is expected on January 15.

How Coronavirus Could Plunge Uganda's Economy Into Crisis

Uganda's Quest to Breathe New Life Into Ailing Economy
Tagged:
Copyright © 2019 The East African. All rights reserved. Distributed by AllAfrica Global Media (allAfrica.com). To contact the copyright holder directly for corrections — or for permission to republish or make other authorized use of this material, click here.