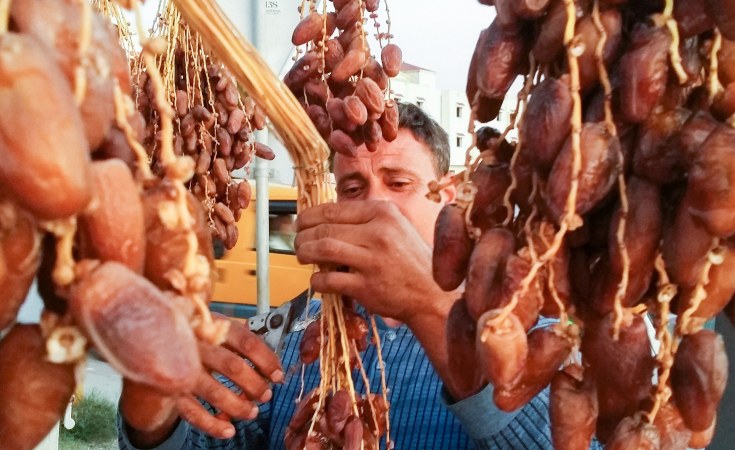 Photo: Monaam Ben Fredj/WikiMedia
Autumn is the season of dates cultivation. This man is cutting the clusters of dates to sell (file photo).
Thomson Reuters Foundation (London)
By Layli Foroudi

Kebili, Tunisia — This month UNESCO included date palm trees and related traditions on its list of the world's cultural heritage - but warming temperatures are harming production

One way to wish someone a pleasant start to the day in Tunisia is: "May your morning (start) with milk and deglet dates".

The most coveted and cultivated of those dates is the nour - "light" in Arabic - a variety some call the "queen of all dates".

"The deglet nour is the best one because she shines, she is beautiful," said Lazhar Ghiloufi, a date seller at a market in Kebili, the main town in Tunisia's most important date-producing region.

"The more luminous the date, the higher the price."

But this year, much of the deglet nour harvest is dull, dry and wrinkled.

Some dates came off the tree waxy yellow, a characteristic of fruit that never matures enough to become sweet, semi-soft and, in the best cases, transparent enough to see the pip.

Date experts say the culprit is rising extreme heat in Tunisia, a symptom of a warming planet.

"It's not just a one-off heatwave, (it is) the manifestation of climate change," said Nabila Kadri, head engineer at the Kebili Technical Centre of Dates, a state institution that supports farmers.

Tunisia is the world's biggest exporter of dates by value, with sales contributing more than $260 million dollars to the Tunisian economy last year, according to the National Observatory of Agriculture (ONAGRI).

But 40-45% of the harvest of deglet nour dates - which make up 90% of dates cultivated in Tunisia - was lost this year due to high temperatures that lasted day and night, Kadri said.

Last week, UNESCO included date palm trees and traditions associated with them on its list of the world's important intangible cultural heritage.

In the nomination, put forward by 14 countries, including Tunisia, the date was noted for its role in sustaining societies in hot and dry parts of the Arab world.

However, as heat become harsher - Tunisia is projected to see its average annual temperature rise by 1.6 degrees Celsius between 2000 and 2050 - the famed deglet nour is not coping well.

"This is the most catastrophic season that I've seen in 10 years," said Abdul Motaleb, 34, a seasonal worker who climbs the palm trees to cut down dates.

"There were a lot of mites and too much heat - the dates come out dry like wood."

There are three main ways that climate change is affecting the deglet nour, according to Hamza Hamadi, a researcher at the Institute for Arid Regions, a state research body in Tunisia.

In October, temperatures were much higher than usual, which led to a loss of about 30% of the crop, with the dates that were harvested of lower quality, he said.

Excessive heat not only dries out the dates but also feeds the growth of an acarid mite that buries itself in the flesh of the date, rendering it inedible.

"If humidity decreases, the number of acarids increases - it is directly proportional," said Hamadi, pointing to piles of wrinkled dates on the floor of an oasis in Jemna, a town in Kebili.

"No animal would eat this," he said.

Changes in temperature have also shifted the palms' flowering and pollination periods, causing the male and female plants to fall out of sync.

Farmers pollinate dates manually to maximise production but increasingly there are shortages of pollen because "either the male tree is too advanced, or the other way round," explained Kadri of the Technical Centre for Dates.

As a result of pollination failures, around 10% of this year's harvest was yellow, hard, and dry.

The deglet nour is much more vulnerable to climate change threats and diseases than other more resistant varieties like the less valuable lalligh, according to Hamadi.

The queen of dates "is very delicate - you need the perfect climate," he said.

For Hamadi, the declining fortune of the deglet nour underlines the need to diversify the dates being grown in Tunisa.

Traditional oases contain a variety of date palms as well as other fruit such as pomegranates. But modern plantations, planted since the mid-1980s, are dominated by the deglet nour, which makes up 90-100% of production.

Date farming was encouraged by Tunisia's French colonial government in a bid to settle nomadic communities, with each family given 60 trees, explained Hamadi, whose grandfather was among the recipients.

"It is the variety that sells the best for exportation and so other varieties have disappeared, given that it is more profitable for the farmer," Louati said.

"A HOUSE WITHOUT DATES"

In Islamic tradition, "people in a house without dates are in a state of hunger." This is literally true in the Kebili region, where around 50,000 families rely on dates, according to Kadri.

She said damage to the harvest this year has hit local farmers hard.

"Imagine there are people waiting for the dates to marry their sons, for the studies of their children, to go to hospital," she said.

Some unlucky farmers, who rely entirely on the date harvest for an income, lost the whole of their crop this year to mites, she said.

"They have a harvest with zero product, zero profit. They just harvest to let the tree start again for next season," she said.

Date vendor Ghiloufi's market stall in Kebili has a third fewer top quality dates this year than previously, he said.

One solution is to sell dry but still edible dates - termed "majbouda" - to exporters who have conditioning centres to better hydrate and package them before they are sold abroad.

But Hamadi and his team at the Institute for Dry Regions are looking at other ideas, including using the fibre from non-pollinated dates - bitter but rich in antioxidants - in juices and cakes.

Farmers also need to be encouraged to plant more than deglet nour dates, he said.

"We need to convince farmers that it is not just important to earn money, but also to protect your oasis," Hamadi said.

He understands the challenge, he said: His own family's date trees are still 99% deglet nour.