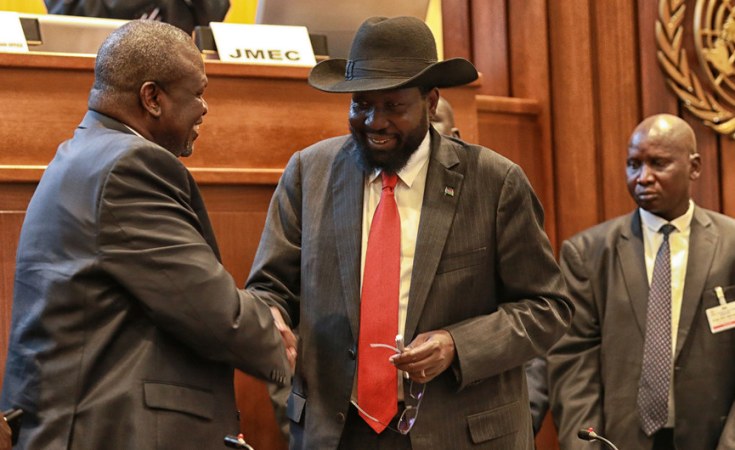 South Sudan opposition leader is to be released from house arrest soon in order to enhance his participation in efforts with President Salva Kiir aimed at forming a transition unity government in February 2020.

Dr Machar's continued incarceration in Khartoum, Sudan, has been one of the key grievances against the Intergovernmental Authority on Development (Igad), the eastern Africa security body.

Igad imposed restrictions on Dr Machar soon after war broke in Juba in 2016, prompting him to escape to the Democratic Republic of Congo and later to South Africa for treatment.

In 2018, he was allowed to stay in Sudan from where he participated in negotiations that culminated in the Revitalised Peace Agreement that September.

His party, SPLM-IO has argued that keeping Dr Machar under close watch after the peace agreement was signed signalled lack of goodwill from Igad.

Dr Machar now travels under tight security from Sudan and Uganda forces, who are the guarantors of the November 7 Entebbe agreement that extended the formation of a unity government by 100 days from November 12.

When Igad special envoy for South Sudan Ismail Wais was confronted with the question by SPLM-IO commanders at Ashwa Cantonment Site on Thursday, he said Dr Machar's freedom of movement would be restored.

"I was sitting with your leader Dr. Machar on Wednesday (December 18) in Juba for two hours. So he is free to move. But it is only one communiqué which missing and that's all," Mr Wais said.

"You the Igad people take sides. Why do I say that? It is because Igad is detaining Dr Machar under house arrest for no reason," Gen Lam said.

Mr Wais was at the site, one of scores around the country where rival soldiers are being harnessed for retraining and integration in a unified national army, for the handing over of wash facilities by Japan and Igad.

There have been complaints that the sites are ill-equipped to accommodate the soldiers with sanitation and food inadequate.

Amb Wais said Machar's movements were not restricted even as the communique is awaited.

"This does not stop him from doing his work. Last month, he was in Addis Ababa participating in Igad Council of Ministers meeting and Summit. He was in Entebbe, Kampala meeting with other leaders and he is now in Juba. He was in Rome to attend the Retreat at the Vatican in April.

In all those circumstances, however, Dr Machar was under close watch by Igad agents.

"Dr Machar is not a hostage of Igad. Igad has no interest being partial in the process," Mr Wais said, adding that trust demanded Igad stays neutral.

Dr Machar's freedom and cantonment are among issues under the security arrangements that forced the postponement of the transition government that was initially to be formed on May 12.

Cantonment had suffered from funding issues until December 13 when President Kiir released $16 million for the security arrangements.

The money is part of the additional $40 million President Kiir committed after the Entebbe accord.

When the revitalized agreement was signed last year, President Kiir pledged $100 million but had only released $30 million by May, promoting deferment of the unity government's formation.

At the Cairo meeting mentioned above, President Kiir assured that the transition government would this time be formed. But there are still deep rifts by the parties on the number of states with experts recommending the original 10 states as a compromise.

The government unilaterally formed 32 states against the SPLM-IOs proposal of 21 states and has recently said the number could be increased up to 40 states.

The government has played brinkmanship in recommending a referendum be held to decide on the number of states despite being heavily cash-strapped and the population too displaced for a credible plebiscite.

U.S. Sanctions South Sudan Chiefs After Kiir Critics Killed
Tagged:
Copyright © 2019 The East African. All rights reserved. Distributed by AllAfrica Global Media (allAfrica.com). To contact the copyright holder directly for corrections — or for permission to republish or make other authorized use of this material, click here.