As the Earth heats up, weather and climate patterns are changing dramatically around the globe. Africa felt the effects of those changes in 2019, experiencing cyclones, droughts and unstoppable rains that jeopardized livelihoods.

He turns the stalks of what could have been a bountiful harvest into silage — for feeding his 15 herd of cattle.

He said the heavy rains that have rocked different parts of Eastern Africa cause the crops to fail.

"At the time of growing crops we expected optimum yields, we had invested heavily on all the crops that we grew, but unfortunately, we were not able to get a good harvest out of all that, which means a lot of money was just thrown to the dogs.  We didn't get anything out of that and we do not expect to get anything elsewhere other than from this land because we depend on rain-fed agriculture," he said.

Apart from the excessive rain, farmers in the area have faced pests and disease challenges.

"Every time we go to harvest the maize, there is rain and when it gets wet, it gets spoiled very quickly. That one has had adverse effects in growing of maize and also in beans. Beans, the first crop we didn't have any harvest at all. It all went bad because of these heavy rains," said Kemboi.

Millions of people have been displaced as a result of widespread flooding this year across large parts of Somalia, Kenya, Uganda, South Sudan and Ethiopia.

The floods have led to hundreds of deaths. In November, South Sudan declared a state of emergency in 27 affected areas with close to a million people affected.

The Kenya Meteorological Department attributes the rains to an irregularity known as Indian Ocean dipole, an oscillation of surface temperature of the sea, which brings weather extremes to countries neighboring the Indian Ocean.

Benard Chanzu is the deputy director of Kenya's Meteorological services.  He said nearly all of Kenya has received above-average rainfall this year.

"In some stations, I can quote like Meru stations, we have seen records which are showing that what has been received is more than 200 percent of the long term average, that is what is usually received in the area," said Chanzu.

With levels of carbon dioxide in the atmosphere climbing to new highs, Dr. John Recha, a scientist specializing in climate and agriculture research, said Africans can expect more extremes in years to come.

The solution for Kemboi and other farmers, according to experts like Recha, lies on adapting to climate change.

That, he said, would require help from government and agencies to implement new agricultural practices such as alternative irrigation methods and efficient water storage for farmers. 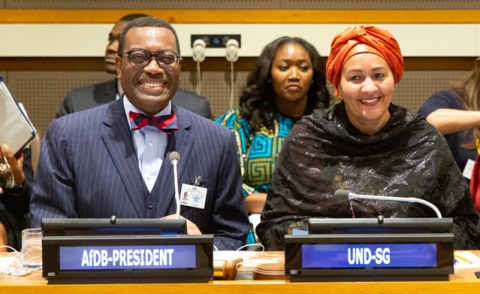 Climate Change Can Set the Stage for Violent Conflict - Expert
Tagged:
Copyright © 2019 Voice of America. All rights reserved. Distributed by AllAfrica Global Media (allAfrica.com). To contact the copyright holder directly for corrections — or for permission to republish or make other authorized use of this material, click here.