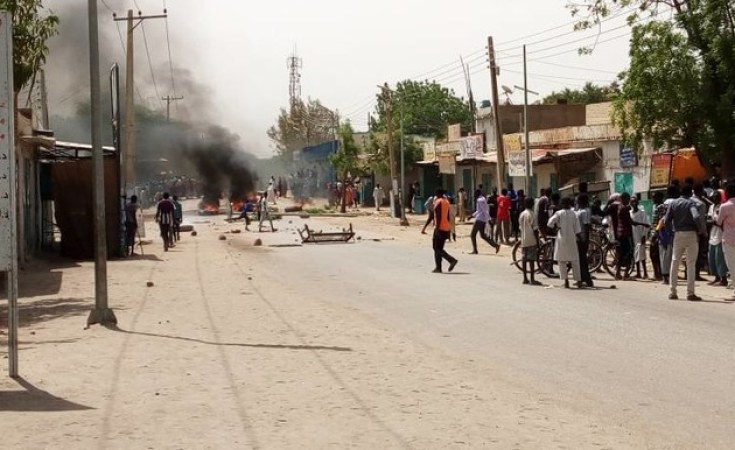 Dabanga
he protest that displaced people of Khamsa Degaig staged in Zalingei, Central Darfur, on May 21 - the day that RSF forces shot and killed a displaced woman (RD)
SudaNow (Khartoum)

KHARTOUM (Sudanow) - Sudan's Attorney General Taj Alsir Alhibir has announced that his office has embarked on investigations in the gruesome war crimes in Darfur in which ousted President Omar Albashir and several other government and security officials are accused by the International Criminal Court(ICC).

Attorney Hibir said a criminal case was filed against Bashir and others for crimes against humanity committed in that Western Region since 2003.

"We have embarked on investigation procedures in the crimes committed in Darfur since 2003 in which Bashir and other officials of his regime are accused," Attorney Hibir told a press conference on Sunday at Khartoum airport, back from a trip to the United Arab Emirates.

The four men are part of a list of 51 government and security operatives the ICC said committed war crimes, genocide and crimes against humanity in Darfur at the heat of the civil war in that Western region in 2003 and after.

Warrants for Bashir's arrest were issued by the ICC in 2009 and 2010 for these charges but he has not been extradited to The Hague, the seat of the ICC.

The panel Attorney Hibir has referred to was chaired by prominent Barrister Dafalla Alhaj Yousif that reportedly advised Bashir to try security officials it found indictable in the Darfur atrocities. But Bashir had arrogantly turned a deaf ear to that advice and advices from other Sudanese politicians (including former Premier Sadig Almahdi) and remained defiant to the international justice.

Meantime, Attorney Alhibir also announced to have embarked "on legal procedures to extradite (by the Interpol) the ex-chief of the State Security Sallah Abdalla for trial inside the country.

Hibir said Abdalla (commonly known by the nickname Salah Goush), is facing four criminal charges, which he, Hibir, did not specify.

"It is impossible to release who commit such crimes on bail," he said, apparently referring to petitions raised by attorneys of those suspects to release them on bail.

Attorney Alhibir also said his office has embarked on measures to retrieve stolen money kept outside the country. "We began to address concerned entities in the countries where those funds were stashed for action," he said, but added that "this is a complicated matter."

Sudanese Court Sentences Over 25 Soldiers to Death
Tagged:
Copyright © 2019 SudaNow. All rights reserved. Distributed by AllAfrica Global Media (allAfrica.com). To contact the copyright holder directly for corrections — or for permission to republish or make other authorized use of this material, click here.