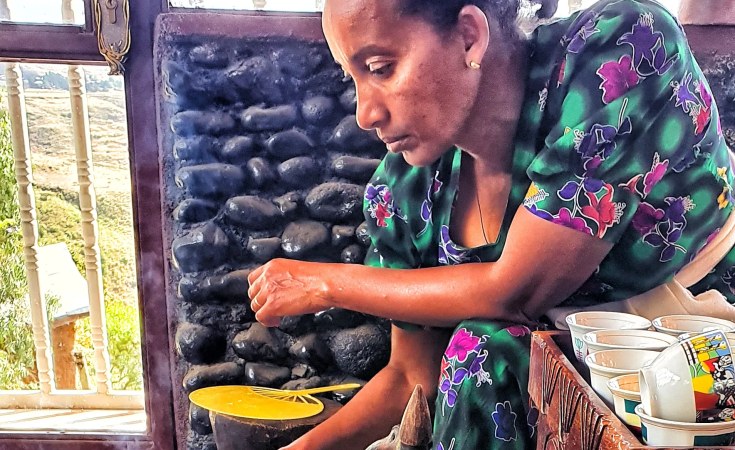 Photo: Daily Maverick / John Battersby
An Ethiopian woman performs the traditional coffee ceremony which involves a painstaking process of grinding the beans in a mortar and pestle, roasting and brewing the coffee and then serving the guests on hand-woven wicker tables.
Daily Maverick (Johannesburg)
analysis By John Battersby

Addis Ababa, a seething and rapidly developing African metropolis, is a regular transit stop for north-south travellers and a destination for officials connected to the African Union and its many commissions.

While transit travellers benefit from the cheaper rates of Ethiopian Airlines - Africa's largest and most globally connected national carrier - the development of Ethiopia's tourism industry is still at an early stage.

It will not stay that way for long.

Mountain lodges and hilltop hotels are appearing in the main historic towns in the north of the country where ruined palaces, obelisks and monasteries of the Ethiopian Orthodox Church add to the Ethiopian enigma.

A recent 10-day visit to Africa’s fastest-growing economy – it grew at an average of 10% a year between 2008 and 2018 – revealed a country of 105-million people with a fascinating history and a kaleidoscope of ethnic, religious and cultural diversity.  It is Africa’s second-most populous country and was the fastest growing economy in the world last year, albeit from a low base.