Abuja — Nigeria is a country blessed with many resources. A young vibrant population, abundant mineral resources (which are either not fully explored or whose potentials are exploited by only a few in power).

Besides, the country's diaspora population has swag when it comes to impact. Or how do you beat the remittances of US$25 billion which according to PwC, represented 6.1% of GDP in 2018?

Another thing Nigeria is blessed with, yet, poorer for it, is the well-scripted policies that later turn out to be underground avenues for diversion of funds and overt misappropriation. Many funds meant for emergency management have ended up being used for elections, agriculture loans and travel expenses.

Audit reveals major diversions took place during the presidencies of Jonathan and Buhari.

Unfortunately, the Federal Government of Nigeria shows no regard for the Auditor General's recommendation to discontinue processes that divert and misappropriate constitutionally appropriated funds.

Moreso, key government institutions do not consider the grave social implications of diverting each single Naira from the special intervention fund under their auspices.

It is sad to note that lives have been lost, access to affordable healthcare and good education have been undermined at every instance of fund diversion.

The Nigeria Extractive Industries Transparency Initiative (NEITI) audit process have reported how beneficiary agencies of government divert or embezzle refunds. At other instances, they show how these agencies have either engaged in contract corruption or neglected their core function of ensuring that paying institutions remit the exact amount due.

The latest audit report by NEITI looked into the financial operations of revenue-generating and beneficiary agencies from 2012 to 2016. This audit scan revealed among others, how the Federal Government led by Jonathan, and then, Buhari, diverted NGN93.7 billion meant for the Derivation and Ecology fund.

The report noted that between 2012 to 2016, the Government directed the Ecology Fund Office (EFO) to release funds for various projects that were clearly out of the purview of the Agency.

The Federal government memos for the loan of N93,768,951,164, according to NEITI, states reasons such as funding of budget deficits and advance to States and Local Governments to meet shortfalls in their revenue. However, these monies were termed loans and did not spell out the recovery or repayment process.

Many of such loans ended up being bad debts and so render the designated use of the funds impossible. For example, Sahara Reporters quoted the Auditor General's comment with regard to this FG's loan in 2016 saying "the 2017 budget did not include any appropriations for the repayment of these borrowings.

To show these actions were deliberate and with the likelihood of corruption, NEITI lamented how it's auditors were denied documentation to carry out a thorough evaluation. They captured their frustration saying "we were unable to verify the projects and not given access to the relevant supporting documents and records."

The Ecological Fund was established in 1981 through the Federation Account Act (1981) and has passed through three stages of modifications in 1984, 1992 and 2002. It is an intervention facility established to address serious ecological problems across the country.

The fund's sources of revenue are statutory allocation (which is 1% of FGN share of allocation of Federation Account) and Excess Crude allocation. The statutory beneficiaries of this fund are the National Emergency Management Authority and any state in the federation facing ecological problems.

Transfer from the Federation Account to Derivation and Ecology Fund 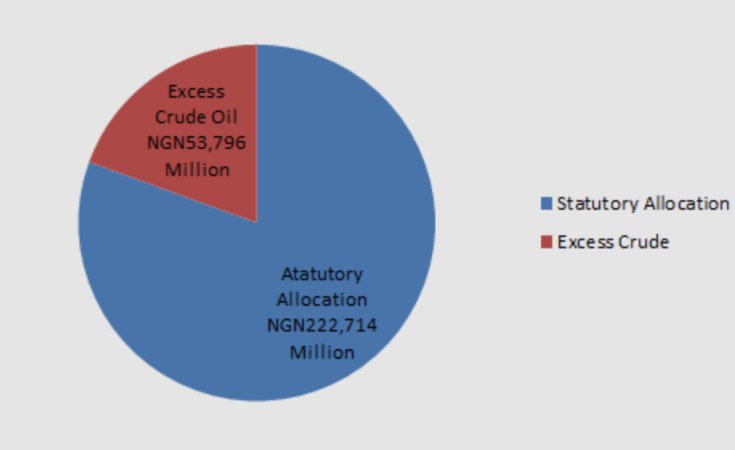 Further analysis shows that 81% of the Fund's revenue was sourced from statutory allocation while the excess crude oil source accounted for just 19% as shown in the chart 'Questionable Disbursements from the Ecology Fund'.

Though the fund was set up clearly to address serious ecological problems across the country, NEITI submitted that "disbursements from the fund were made to beneficiaries outside the purpose of setting up the fund". The list below provides a peep into the questionable disbursements by the Ecological Fund Office on behalf of the Federal Government.

A number of investigative reports have shown how ecological projects are abandoned due to lack of funds to complete the projects. Of course, there are situations where corruption on the part of contractors and public officials is the reason for project failures.

Many important projects meant to mitigate the burdens of climate change on vulnerable communities remain abandoned or never initiated, regardless of the government's self-justification for the diversion and misappropriation of the Ecological funds. Consequently, livelihood and basic transportation are daily hampered by these decisions.

However, to ensure that the country adequately tackles its ecological challenges, including those encountered at the new frontier of climate change, it is necessary Federal government yields NEITI's recommendations that the ecology fund should be used for the purpose of its establishment.

Tagged:
Copyright © 2019 Dataphyte. All rights reserved. Distributed by AllAfrica Global Media (allAfrica.com). To contact the copyright holder directly for corrections — or for permission to republish or make other authorized use of this material, click here.