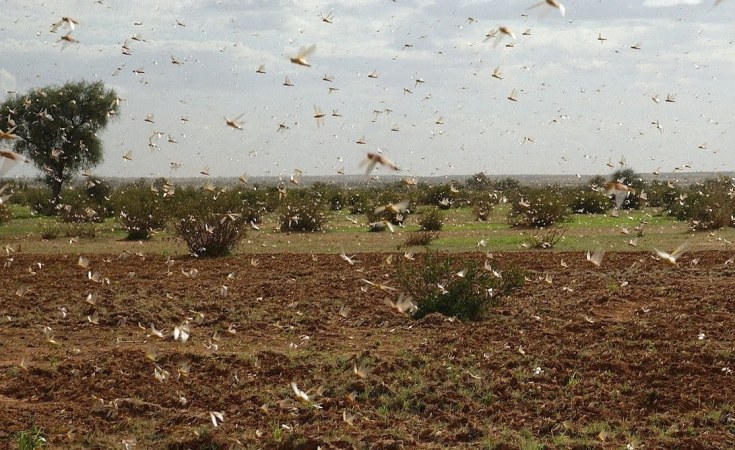 Residents of Wajir and Mandera Counties have resorted to desperate methods to scare away armies of desert locusts that invaded parts of the devolved units five days ago from neighbouring Somalia.

Affected residents have resorted to shouting, honking of vehicles, striking metallic objects and whistling to get rid of the insects that have left a trail of destruction in their wake.

According to reports, others resorted to reading the Koran to get rid of the flying pests.

In some areas, police who were providing security to residents were seen shooting in the air to scare the locusts.

"The police may have used rubber bullets in some instances to scare the pests away but they were there specifically to provide the residents with security as the area where the insects first settled is a terror hotspot," Hassan Gure, a county agricultural official, said.

All this comes as the government remains mum on the invasion that is threatening to wipe out much-needed animal pasture.

The unusual methods, however, seem to have yielded results as the first group of locusts which had first settled in Kutulo area were successfully repelled to Wajir-Marsabit border via Tarbaj, Griftu, Qara and Arbajahan areas.

Mr Gure said that by Wednesday evening, the swarm had migrated into Marsabit County.

However, their celebration was short lived as another colony of desert locusts migrated into northern Kenya from Ethiopia Wednesday evening.

Reports indicate that the flying pests got into the county via Bute and Gurar areas in Wajir North before settling seven kilometres from Bute town.

"We expect the helicopter to begin aerial spraying in the county by Monday. A vehicle carrying pesticides is also on the way to Wajir," he said.

Officials expressed fears that if not tackled on time, the swarm of locusts could spread to other areas.

A section of local leaders and residents blamed the government for lack of disaster preparedness and failure to act on time despite knowing that the pests could migrate to Kenya.

Locust Swarms Threaten Food Security in East Africa, UN Warns
Tagged:
Copyright © 2020 The Nation. All rights reserved. Distributed by AllAfrica Global Media (allAfrica.com). To contact the copyright holder directly for corrections — or for permission to republish or make other authorized use of this material, click here.