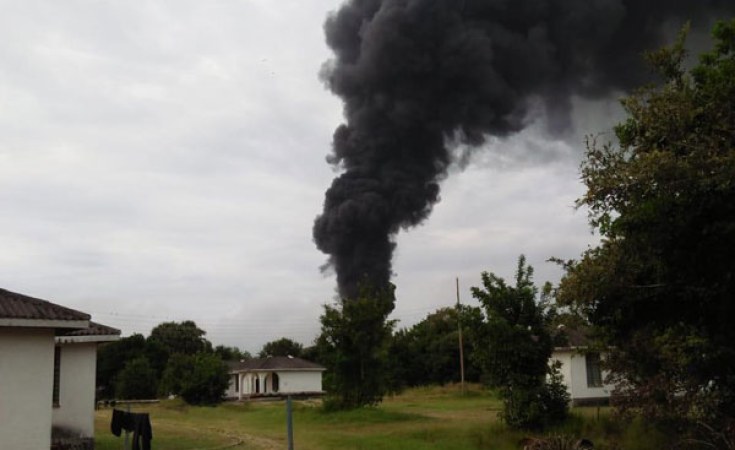 Daily Nation
A cloud of smoke is pictured at Manda Bay Airfield in Lamu County following an attack by Al-Shabaab militants on January 5, 2020
The Nation (Nairobi)
By Amina Wako

Al-Shabaab's report on the Sunday attack at Manda Bay Airfield in Lamu County was exaggerated, the US military has said.

Manda Bay is an area where US forces provide training and counter-terrorism support to East African partners.

Following the ambush at dawn, the terror group issued a statement, saying there were "severe casualties on both Kenyan and American troops stationed there".

It added, "The Mujahideen fighters covertly entered enemy lines, successfully stormed the heavily fortified military base and have now taken effective control of a part of the base."

But the US Africa Command, Africom, dismissed the group's statement, saying the message was distorted to create the wrong impression.

"Al-Shabaab resorts to lies, coercion, and the exertion of force to bolster their reputation to create false headlines," said Maj. Gen. William Gayler, US Africa Command's Director of Operations.

Al-Shabaab also claimed it seized part of the military base and that fighting was ongoing.

Africom, however, noted that the airfield had been cleared and was being secured.

"The security situation at Manda Bay is fluid. Al-Shabaab is a terrorist group that has repeatedly communicated an intent to attack US interests. It is important to counter Al-Shabaab where they stand to prevent the spread of this cancer."

The command said more information will be released after personnel are accounted for.

In its statement, the Kenya Defence Forces (KDF) said the attackers were successfully repulsed.

The army also said four bodies of Al-Shabaab fighters were found and that a fire that broke out during the attack.

"Arising from the unsuccessful breach [was a fire that affected] some of the fuel tanks at the airstrip. The fire has been put under control and standard security procedures are ongoing," it said in a statement posted on its official social media pages.

Lamu residents had been assured of security following an attack by Al-Shabaab on two buses in Nyongoro.