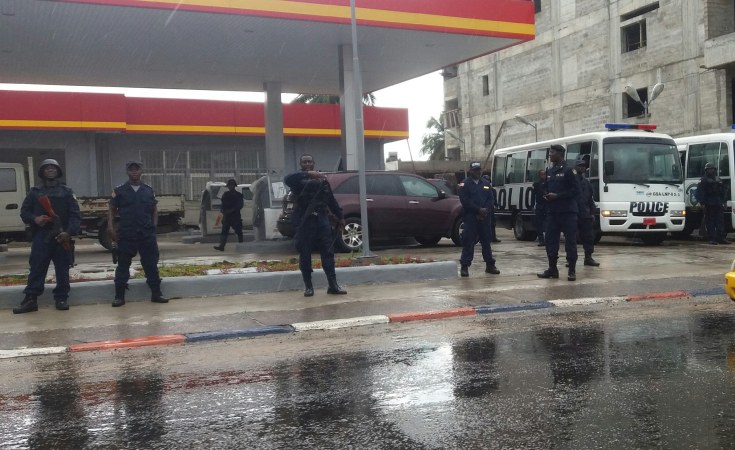 Monrovia — The Alternative National Congress of Mr. Alexander Cummings has strongly condemned the violent ending to Monday's protest organized by the Council of Patriots.

In a statement Monday night, the party which had opposed a Weah-step down campaign but endorsed the right of Liberians to express the constitutional rights, accused the George Weah-led government of taking its eye off the ball and providing security for protesters. "This government, having informed citizens of the provision of security for the duration of the protest, failed to do so when it chose to use the same security to launch tear gas and spray hot water on our people," the party said.

Describing the spraying of teargas on peaceful protesters as a clear trademark of tyrants, the ANC said the action by the Liberian National Police subjected protesters to fear, suffering, injury and risk of death. "This singular act on the part of the government is intended to abrogate the constitutional right of assembly guaranteed to citizens of this nation and sets the precedence for future use of arbitrary decisions to revoke our constitution in part or in whole. It is unacceptable and will not be tolerated."

Information Minister Lenn Eugene Nagbe told FrontPageAfrica Monday that the use of teargas was triggered by protesters decision to light coal pot on the grounds of the Capitol, seating of both the National Legislature, the Temple of Justice and the Liberian presidency.

Said Minister Nagbe: "The Police have been providing security for both the COP folks and the rest of the citizens who wanted to go about their normal businesses since 7am this morning. In spite of the rowdiness by the COP, obstructing traffic on the bypass and parts of UN drive, the police maintained a passive posture. When the COP provocateurs decide to light fires on Capitol Hill, and pose imminent danger to lives and property, even then the police did not act immediately. They sort to ask them to stop such unacceptable actions, the religious leaders even interceded to no avail. The COP persisted in putting lives at risk. The police therefore applied appropriate force to forestall danger and disperse them."

As a government, minister Nagbe said the Weah-led government respects democracy as well as allowing citizens to exercise of freedoms and will protect and defend all citizens in the exercise of all rights. The minister however said the government will not bend in performing its responsibilities to protect the peace and security of the state.

In its response, the ANC rejected the government's excuse that led to the use of force which was necessitated by the cooking of food for protesters on the side of the street at the protest site.

Said the ANC: "It is common sense that where large groups of people are gathered, there will be the need to provide food and water to them. Hence, in our December 28, 2019 press release, we called on the government and the COP to negotiate the logistics of the protest which also covers the provision of food and water. Had these logistical issues been discussed and agreed upon, the violence which occurred today may not have happened. The government bears full responsibility for inflicting harm and injury on its citizens who for hours remained peaceful during their protest. The right of peaceful assembly given to Liberians as prescribed in our constitution cannot not be abrogated by any government unless under a state of emergency."

The party also expressed grave concerns regarding media reports that the LNP at a news conference Monday searched and confiscated the vehicle of Rep. Yekeh Kolubah(ANC, District No. 10, Montserrado County), in which the LNP claims to have found guns and other illegal items.

The party said while it is the right of the police to investigate crimes or the allegations thereof, the party will not accept any attempt to frame its partisan or innocent citizens of crimes with the intent to quiet them through bogus charges and imprisonment. "The opposition will not be silenced. We will continue to hold this government accountable and where necessary, exhaust all alternative measures to ensuring that they address the plight of our people. Again, Liberia is all we have and as a party, the ANC shall continue to guide against the government's misuse of its power and authority to oppress our people or any attempt to derail our peace."

Previous Story
Protestors Commend Government, But... ..
Next Story
Liberia's Problem - A Critical Lack of Leadership Committed to Serve and Not to Be Served