Africa: Who Will Be Crowned Africa's Best Footballer?

Africa is set to crown its best footballers for the year 2019 a the Confederation of African (Caf) Player of the Year Awards in Hurghada, Egypt Tuesday night.

The contest has been whittled down to Senegalese striker Sadio Mane, Egyptian midfielder Mohamed Salah and Algerian winger Riyad Mahrez, but it is Mane who is highly expected to clinch the award, for the first time, owing to his astonishing season in 2018-2019, where he won the Premier League Golden Boot after scoring 22 goals and also bagged 10 goals in 11 matches in the Uefa Champions League helping Liverpool win it after a 14-year wait.

He has been a finalist in the previous three editions of the award, but in all those instances, he never won. He was Senegal's main man at the 2019 Africa Cup of Nations (Afcon), where he netted three goals on their way to the final, where they lost by a solitary goal to Algeria.

He grabbed a brace in their 3-0 group stage victory over Kenya and added one more in their round of 16 1-0 win over Uganda. He was also a vital part of the team as they beat Benin and Tunisia in the quarters and semis respectively, his influence playing a big role in Senegal's run to the final.

Salah, who is yet to arrive in Egypt, just like his teammate Mane, enjoyed a great season and was instrumental as the Reds won the Champions League title, netting five goals and laying up two assists in a total of 12 matches. He has won the coveted award twice, in 2017 and 2018.

Riyad Mahrez, who won the award in 2016, inspired Algeria to the 2019 Afcon title, scoring three goals, the biggest of those being his last-gasp free-kick against Nigeria in the semi-finals, a goal that has also been nominated for goal of the year. He had a slow start to life at Manchester City, but is now an integral part of the squad and starts regularly.

As for the women, only South African Thembi Kgatlana and Cameroon's Ajara Nchout Njoya stand in the way of Nigerian Asisat Oshoala's race to clinch a fourth African Women's Player of the Year Award. 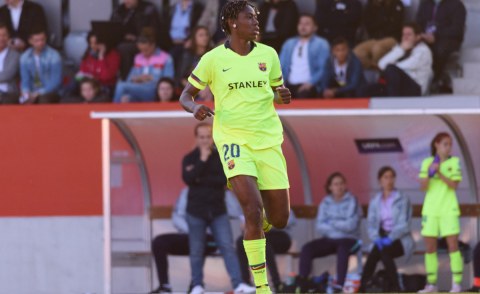 Mane, Oshoala Crowned African Footballers of the Year
Tagged:
Copyright © 2020 The Nation. All rights reserved. Distributed by AllAfrica Global Media (allAfrica.com). To contact the copyright holder directly for corrections — or for permission to republish or make other authorized use of this material, click here.