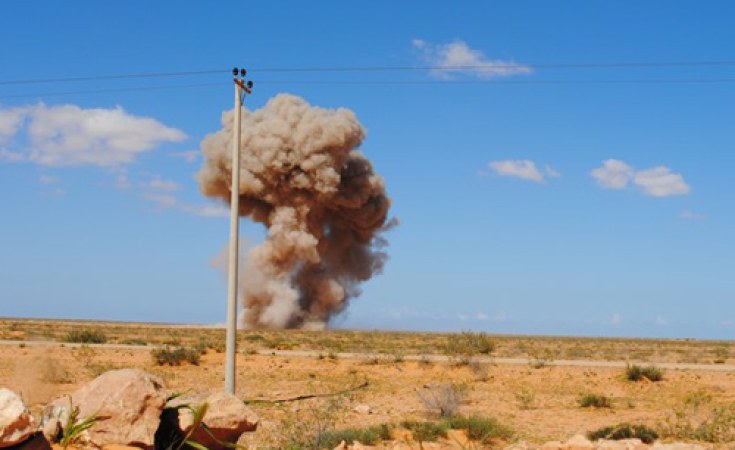 Eastern forces, led by Khalifa Haftar, have announced the capture of the coastal city of Sirte, previously controlled by the Tripoli government. The news comes a day after Turkey deployed troops in support of Tripoli.

Forces loyal to military strongman General Khalifa Haftar have seized control of the coastal city of Sirte. The strategic site fell to the self-styled Libyan National Army within a matter of hours on Monday.

Since 2016, Sirte has been ruled by forces allied with the UN-recognized Government of National Accord (GNA) based in the capital, Tripoli.

Ahmed al-Mosmari, a spokesman for the Libyan National Army (LNA), announced the capture of Sirte at a press conference in the eastern city of Benghazi, saying the city was seized in a "lightning" offensive and struck from land and sea positions with air cover.

"Sirte has been totally liberated," al-Mosmari said on television. "The operation was quick and lasted only three hours," he added, although preparations had started months earlier with airstrikes on areas of pro-GNA forces.

The GNA did not immediately confirm the capture of the city but a pro-GNA military commander, speaking on condition of anonymity, acknowledged the news, according to French news agency Agence France-Presse (AFP).

The fall of Sirte to LNA forces is major win for Haftar, as the city is located some 230 miles (370 kilometers) east of Tripoli.

The military commander launched an operation in January 2019 to "purge" southern Libya "of terrorist groups and criminals," and captured several towns with support from local tribes.

In December, Haftar announced a "final" battle to take Tripoli.

Sirte was the hometown of Libya's former president and longtime dictator, Moammar Gadhafi, who was ousted and killed by NATO-backed Libyan rebels in 2011.

After Gadhafi's death, the oil-rich country fell into chaos and has since been divided between the GNA in Tripoli and Haftar's forces in east. The LNA also controls most parts of southern Libya.

Haftar's east-based government is supported by the United Arab Emirates and Egypt, as well as France and Russia.

The Tripoli-based government is backed by Turkey, Qatar and Italy.

On Sunday, Turkish President Recep Tayyip Erdogan declared Ankara had begun deploying its soldiers in Libya to support the GNA.

Turkey's role in the country has raised concern across the region, as well as in Europe.

The European Union has expressed alarm over an "imminent" intensification of violence around Tripoli.

Foreign ministers from France, Italy, Greece and Cyprus are expected to meet with Egypt on Wednesday to discuss "ways to push efforts to reach a comprehensive settlement."

The neighboring country of Algeria, which hosted GNA Prime Minister Fayez al-Sarraj and Turkish Foreign Minister Mevlut Cavusoglu on Monday, has urged the UN Security Council to impose a ceasefire in Libya.

Ghassan Salame, the UN's special envoy to Libya, said Monday that he felt "angry" at foreign interference in the country.

In response to Turkey's deployment of troops, Salame said countries should "keep out of Libya ... there is enough weapons in Libya."

UN Envoy Appeals for Other Nations to 'Keep Out of Libya'

Libya Talks Set for Berlin Following Failed Effort in Moscow
Tagged:
Copyright © 2020 Deutsche Welle. All rights reserved. Distributed by AllAfrica Global Media (allAfrica.com). To contact the copyright holder directly for corrections — or for permission to republish or make other authorized use of this material, click here.