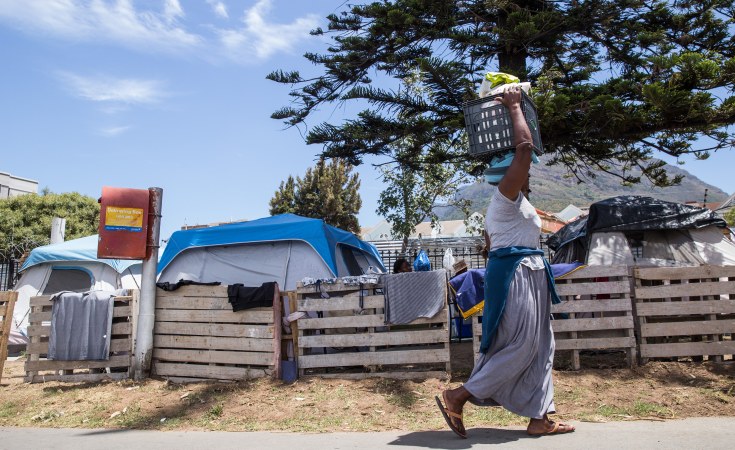 Photo: Ashraf Hendricks/GroundUp
Several families have been camping outside the demolished Arcadia Place old age home in Observatory after being evicted three months ago.
GroundUp (Cape Town)
By Ashraf Hendricks

"We grew up as backyarders and we are still backyarders today", says Sinazo Jordon. She is among several families who have been camping outside the demolished Arcadia Place old age home in Observatory for three months.

The old age home was occupied in September by a group of about 200 backyarders, homeless people and shackdwellers. The property is owned by Cape Peninsula Organisation for the Aged (CPOA) and had been left vacant before the occupation.

The occupiers were evicted from the building in October but with nowhere to go, many of them began sleeping in tents with their belongings on the lawn in front of the premises. The building has since been demolished and is expected to be rebuilt later this year.

Nearly three months later, very little has changed for about 70 people including young children still living along the main road. On Tuesday, Jordon said all they wanted was affordable housing near the inner city. About ten tents, clothing lines and a makeshift wall to demarcate their area from pedestrians can be seen across the lawn.

Jordan said living in tents was not ideal and that they were considering building shacks on the lawn for safety. "Staying outside has been difficult as criminals have tried robbing us by cutting through our tents," she said pointing out some tents with duct tape used to patch up the cuts. Rats have also been a problem.

Occupier Lindelani Mancayi shares a tent with her three children, the youngest is seven. "The situation is terrible here ... I'm worried about my child as he goes back to primary school next week," she said. For sanitation, Mancayi said they have to pay R2 to use the toilets near Pick 'n Pay because the nearby fast food restaurants won't let them use the bathrooms without purchasing something first. For water, she said they collected water in large containers from townships and transported it back there.

Jordon said they were meeting a lawyer this week for advice on a way forward. It is unclear whether any legal action will be taken against these families.