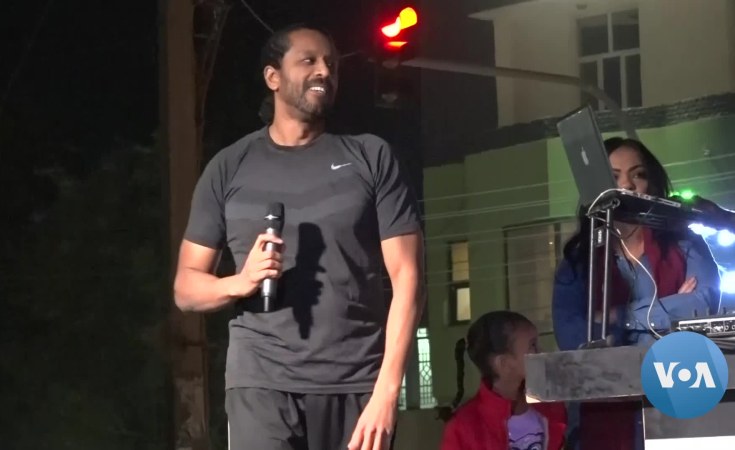 Sudanese musicians who were banned by the government of ousted president Omar al-Bashir have returned to Sudan to play at a series of New Year concerts — in a move seen as symbolic of the changes that have taken place in the country.  The Sudanese artists, some of whom were living in the United States, also marked the one-year anniversary of the mass protests that led to Bashir’s downfall last April.

The Sudanese hip-hop group Nas Jota returned to Sudan for a New Year’s Eve concert — their first show at home since 2004, when authorities banned their music for being political.

The members of Nas Jota, which means "chaotic people" in Arabic, were forced to flee after former president Omar al-Bashir’s government cracked down on artists who called for protest and new leadership.

"This is the moment that we were looking for... is that finally I can come back to my country, make live events for my people with no fear.  Before I couldn’t," he said.

The musicians are hailing their return with charity concerts marking Sudan’s Independence Day (Jan 1), the New Year, and a new Sudan.

Some of the artists, like hip-hop singer Ayman Mao, have been living in the United States and hope to see similar freedoms in Sudan.

"In 2020, I wish for the youth in Sudan to have a freedom of expression, freedom of justice, equal right, especially the artists, I want them to have a Sudan where they can be creative and express themselves," he said.

Returning artists like singer Rasha Sheikh Eldin acknowledge that many Sudanese are living in tough circumstances.

"I’m so excited; the country feels new although it’s still difficult for everybody.  Prices are really high, life is difficult, but people are happy and hopefully and full of plans for the future.  It’s fantastic," she said.

The concerts also celebrated the one-year anniversary of the December protests against skyrocketing consumer prices that led to Bashir’s downfall.

Many of the protesters say they listened to the banned music during the months-long demonstrations. Hassan Ismail, who attended the Nas Jota concerts wearing Sudan's flag around his neck, described the music as motivating young people.

These songs, Ismail said, have inspired the youth and encouraged them because they described what was happening. "It gave young people motivation and power," he said.

The concerts will continue through mid-January to support the relatives of those killed during last year's government crackdowns and to promote peace across Sudan.