Cameroon: Elections - Materialisation of Power to the People 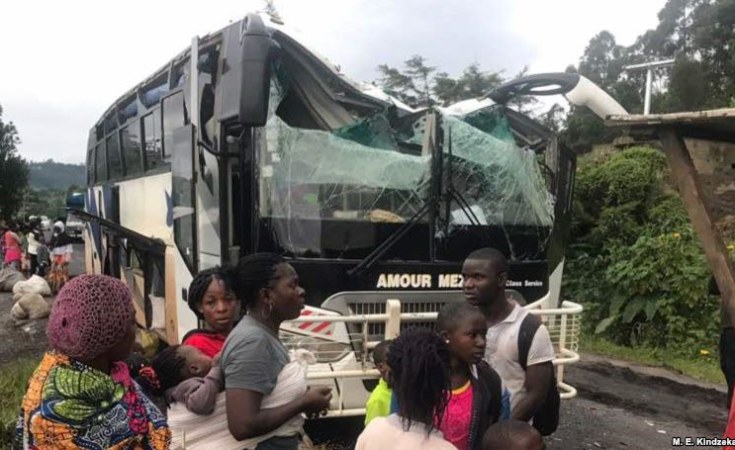 Moki Edwin Kindzeka/VOA
A bus attacked by armed separatist and its passengers are seen at Akum, a village 10 Kilometers from Bamenda, the capital of the Cameroon's English speaking northwest region, Sept. 9, 2018.
Cameroon Tribune (Yaoundé)
opinion

In a democracy like the case of Cameroon the people make the choice of their leaders at different levels through the ballot box.

The over 6,851,128 eligible voters in Cameroon will on February 9, 2020 use the opportunity of the twin legislative and municipal elections to elect Members of the National Assembly and municipal councillors who will represent them and champion their development for the coming five years. The Head of State, President Paul Biya in his New Year message to the nation on December 31, 2019 acknowledged the importance of the two polls in which the population will, through direct universal suffrage, use their powers to select their leaders at the local level. President Biya said, "Therefore, I urge all Cameroonians who are registered on the electoral roll to go and vote, bearing in mind that they will be electing the men and women who will translate into reality the reforms desired by the Cameroonian people, notably fast-tracking the implementation of decentralization." The twin elections are being organised at the time in which social media networks and some news outlets have gone viral with influence-peddling intended to thwart the democratic rules and pervert the culture of power belonging to the people in relation to choosing leaders. President Biya taking the morose political atmosphere into consideration put things right, "Neither the social media nor news outlets can change the outcome of an election, talk less of illegal protests, violence and personal or hate-filled attacks." He further stated, "Needless to recall that the sole arbiter in a democracy is the sovereign people. When the sovereign people make a choice through free and fair elections and the results are proclaimed after review of petitions, such results must be recognized and accepted by all." As political party officials and candidates in the upcoming twin elections brace up for the polls, they must bear in mind that, "Participation in the democratic life of one's country requires compliance with its rules and joining political parties which carry out their activities within the confines of the law. This will be tested during the upcoming 9 February 2020 municipal and legislative elections," President Paul Biya reminded. Mobilisation for the elections campaigns expected to kick off this January 25, 2020 is gathering steam and parties and candidates must put up enticing messages, behaviour and deploy adequate means to woo voters. The strength of any political party will be determined by the number of seats it will win in the National Assembly and the number of municipal councillors to pave the way for the party to run councils. The people to whom power is devolved will not favour any political party through illegal protests and other undemocratic means but will vote the party's lists to victory. Media outlets will certainly be used to pass across the campaign messages of the parties, social media will also be used for the same purpose. However, the media alone will not win elections. Their proper use will certainly woo voters and influence their choices that must only be manifested through the ballot box.

Cameroonians Fleeing to Nigeria Ahead of Elections
Tagged:
Copyright © 2020 Cameroon Tribune. All rights reserved. Distributed by AllAfrica Global Media (allAfrica.com). To contact the copyright holder directly for corrections — or for permission to republish or make other authorized use of this material, click here.