A journalist, who was arrested while covering events that followed the incarceration of Kyadondo East MP Robert Kyagulanyi, alias Bobi Wine, has said he faced a rough time in custody yet he was innocent.

Mr Willy Tamale of BBS TV told Daily Monitor yesterday that at the time he was arrested, he was giving his media house a live update about the roadblock that had been placed in Kasangati as he was heading to Our Lady of Good Counsel in Gayaza, Wakiso District, before he was manhandled by traffic officers.

"Even when I explained to them that I was a journalist, they did not listen to me. They manhandled me, dragged me into cells even when I was very sure I was an innocent man at that time," Mr Tamale narrated.

Mr Tamale was arrested together with other journalists on Monday but he says he was unlucky that he is the only one who remained in custody for two nights and two days with the political activists, who were arrested ahead of Bobi Wine's consultative meeting in Gayaza.

"We were bundled up in a small room, about 25 of us. There was no space to sit or stand and the big challenge came at the time of sleeping. We had to sleep in turns. This traumatised me so much because I had been denied my right and I felt I had not fought enough for it," Mr Tamale said.

It took the intervention of Mr Robert Ssempala, the head of Human Rights Network for Journalists, a body that monitors the well-being of journalists.

"I feared for my family that I had left behind and no one explained to me why I had been arrested. I didn't see anyone coming to my rescue until Mr Ssempala came. He was confused by the police that all the journalists in custody had been released," Mr Tamale said.

On that day, several journalists including Mr Eddy Kisekka (NBS TV), Mr Anold Sseremba (NTV), Ssematimba Bwejiire (Radio Simba) and Mr Tamale were detained and in the ensuing chaos Mr MosesEgesa (NTV driver) sustained a wound on his hand after being hit by a teargas canister.

However, many of them were released by police several hours later after the bosses went to police.

Police said the arrested people would be charged with different cases including disobedience of lawful orders, inciting violence and involving unlawful assemblies.

Mr Ssempala said the police worked with a lot of intrigue to release Mr Tamale and at first they denied having him in their custody which he says ought to stop since the two entities are independent and allies.

"He was charged with disturbance and disobedience. The charges are ridiculous and if police continue with this habit, journalists will get tired and riot against them. We call upon them to leave the journalists do their work as much as they do," Mr Ssempala said. 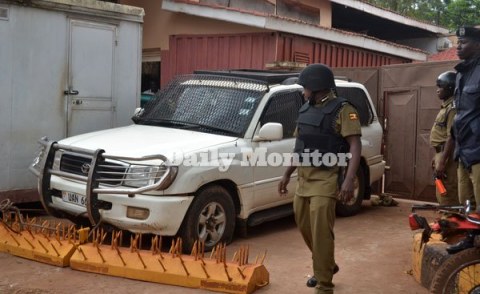 Uganda's Bobi Wine Asks Election Body For Help With Police
Tagged:
Copyright © 2020 The Monitor. All rights reserved. Distributed by AllAfrica Global Media (allAfrica.com). To contact the copyright holder directly for corrections — or for permission to republish or make other authorized use of this material, click here.