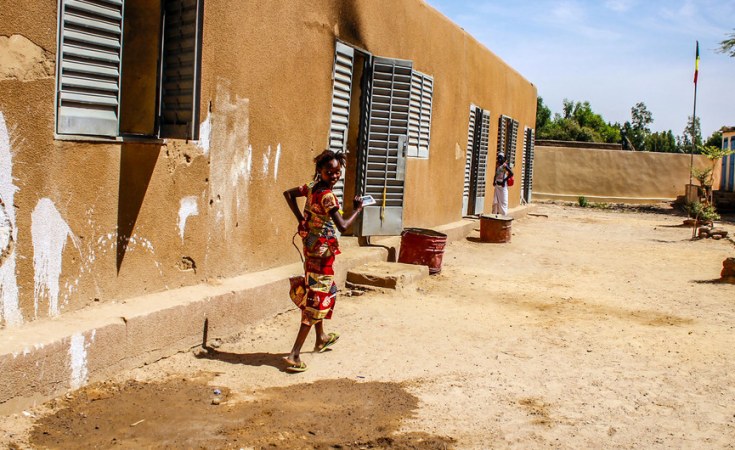 @OCHA/Eve Sabbagh
A girl runs outside a small community school in Korioume, Mali, where children lack basic equipment, including notepads and pens. Parts of the school have been attacked and in 2013 the village was a Jihadist stronghold.
Inter Press Service

United Nations — The top UN official in West Africa and the Sahel updated the Security Council on Wednesday, describing an "unprecedented" rise in terrorist violence across the region.

"The region has experienced a devastating surge in terrorist attacks against civilian and military targets," Mohamed Ibn Chambas, UN Special Representative and Head of the UN Office for West Africa and the Sahel (UNOWAS), told the Council in its first formal meeting of the year.

"The humanitarian consequences are alarming", he spelled out.

In presenting his latest report, Chambas painted a picture of relentless attacks on civilian and military targets that he said, have "shaken public confidence".

A surge in casualties

The UNOWAS chief elaborated on terrorist-attack casualties in Burkina Faso Mali and Niger, which have leapt five-fold since 2016 - with more than 4,000 deaths reported in 2019 alone as compared to some 770 three years earlier.

"Most significantly," he said, "the geographic focus of terrorist attacks has shifted eastwards from Mali to Burkina Faso and is increasingly threatening West African coastal States".

He also flagged that the number of deaths in Burkina Faso jumped from about 80 in 2016 to over 1,800 last year.

And displacement has grown ten-fold to about half a million, on top of some 25,000 who have sought refuge in other countries.

Chambas explained that "terrorist attacks are often deliberate efforts by violent extremists" to engage in illicit activities that include capturing weapons and illegal artisanal mining.

Terrorism, organized crime and intercommunal violence are often intertwined, especially in peripheral areas where the State's presence is weak.

"In those places, extremists provide safety and protection to populations, as well as social services in exchanged for loyalty", he informed the Council, echoing the Secretary-General in saying that for these reasons, "counter-terrorism responses must focus on gaining the trust and support of local populations".

The Special Representative outlined that governments, local actors, regional organizations and the international community are mobilizing across the region to respond to these challenges.

On 21 December, the ECOWAS Heads of State summit "adopted a 2020-2024 action plan to eradicate terrorism in the sub-region", he said.

Calling "now" the time for action, Chambas drew attention to the importance of supporting regional Governments by prioritizing "a cross-pillar approach at all levels and across all sectors".

Turning to farmer-herder clashes, which he maintained are "some of the most violent local conflicts in the region", the UNOWAS chief highlighted that 70 per cent of West Africa's population depend on agriculture and livestock-rearing for a living, underscoring the importance of peaceful coexistence.

The Special Representative also pointed to climate change, among other factors, as increasingly exacerbating farmer-herder conflicts.

"The impact of climate change on security also spawns a negative relationship between climate change, social cohesion, irregular migration and criminality in some places", he upheld.

The UNOWAS chief noted that in the months ahead, Togo, Burkina Faso, Cote d'Ivoire, Ghana, Guinea and Niger would be democratically electing their leaders and maintained that "all-too-worrying" security trends must not distract from political developments.

"Unresolved grievance, incomplete national reconciliation processes and sentiments of manipulation of institutions and processes carry risks of tensions and manifestations of political violence", he warned.

In the months ahead, Chambas stressed that UNOWAS would continue to work with partners on the national and regional levels to promote consensus and inclusiveness in the elections.

"As UNOWAS' mandate is renewed, we count on the Council's continued full support", concluded the Special Representative.

Strategies to Combat African Terror Attacks Are Under Scrutiny
Tagged:
Copyright © 2020 Inter Press Service. All rights reserved. Distributed by AllAfrica Global Media (allAfrica.com). To contact the copyright holder directly for corrections — or for permission to republish or make other authorized use of this material, click here.